Lots of big changes happened this past month for Tanner and it feels like with the drop of a hat, my (big) baby is turning into a little boy.

First up, the kid was finally able to sit up on his own! He nailed it a lot quicker than his big brother, and hasn’t really had any flops. He also started to army crawl! Several attempts to get on all fours have been made, but in order to move, the belly has to be on the ground. I mean, I don’t blame him, he’s got like 25 pounds to lug around!

Same size clothes and diapers as last month. The diapers seem to fit a bit better- I’m thinking the increased activity has trimmed his waistline (insert laughing emoji here). A lot of his pajamas are starting to get a bit snug too. We have been putting him to bed in a sleep sack, but he was having a hard time settling at night which we attributed to him being overheated. So we dropped that. 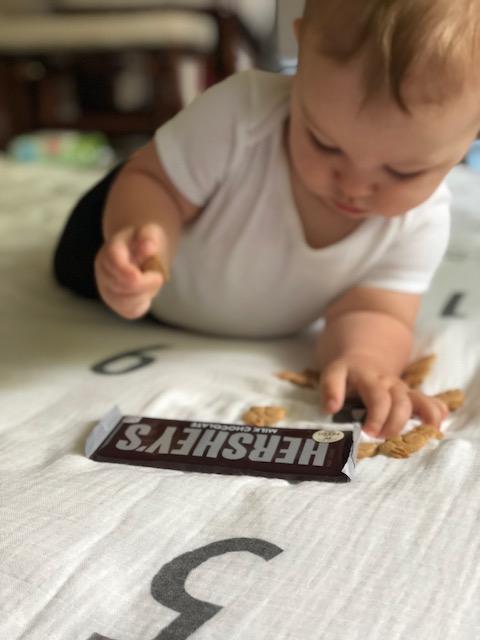 He sleeps full nights now. WOO-FREAKING-HOO!!! I work a few nights, so Tyler and I have shared duties in getting him to bed (which I think totally throws him off, but what are you gonna do) so bedtime varies anywhere from 7:30pm-9pm with wakeups around 6:30-7:30am. A few naps a day, but not in the crib- usually when we go for walks or he’s in the car. Unfortunately, car naps are a crap shoot because he has graduated to the convertible carseat, so I can’t just take the seat out to allow him to nap longer.

He eats solids 3x a day and his first tooth popped through yesterday! Because of that, he’s been way more interested in sucking on actual food and has even down some egg, muffin, and fruits & veggies. LOTS of milk. LOTS.

He sits up in the tub, crawls towards toys, LOVES my phone, LOVES me. Actually, I think he’s pretty obsessed with me. Will often whine or cry if I’m in eyesight and not holding him. It can be aggravating a bit when I’m trying to get things done, but I totally love the snuggle time with him. 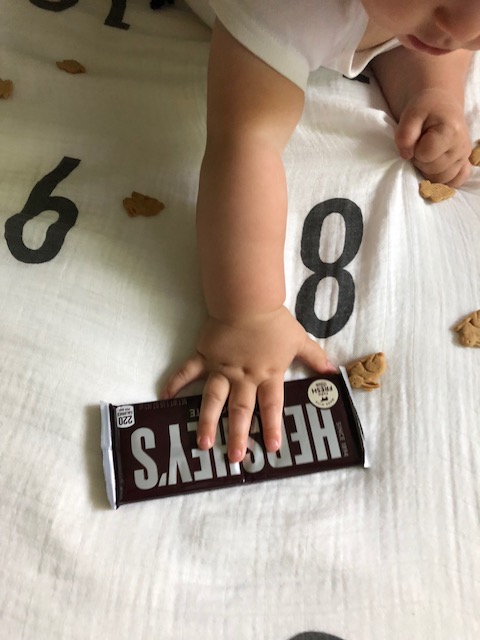 He did AMAZING on his first plane ride. Took two naps on the first flight AND let me change him in the bathroom without a peep. Then he slept from takeoff through landing on your second flight!

At 8 months, Tanner is much more reactive to his name and sounds and can even imitate some noises we make to him. He is still the absolute smiliest, happiest baby ever and I need time to slow the heck down so I can savor every last drop of him littleness. 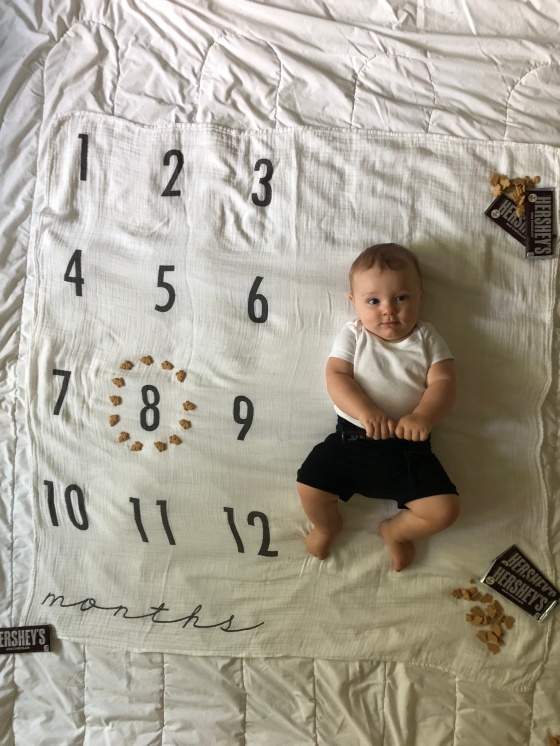