Pancakes! Ah, I missed my Vitamix so much. The bad boys were drenched in maple syrup and I just about licked the plate. 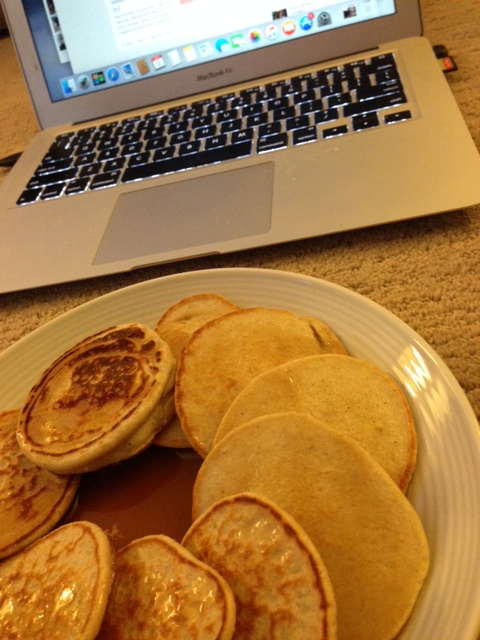 The morning was pretty low key: workout, errands, cleaning…. booooooring. But this guy finally fit into a pair or harem pants my mom made. Is he going to be a blondie? From his eyebrows it looks like it! 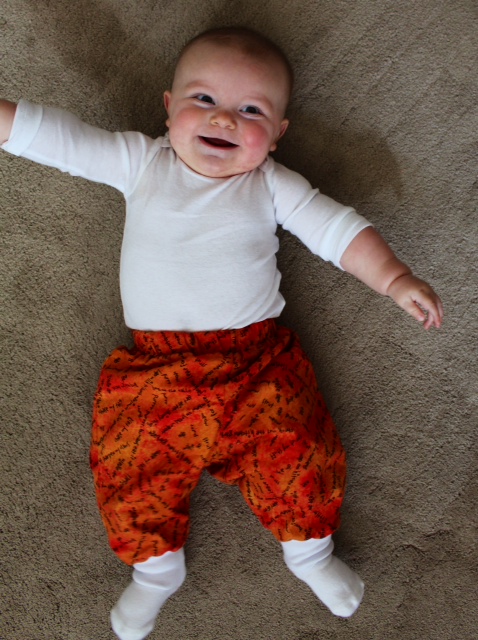 After Tyler got home from work, we made a pre-Thanksgiving trip to Costco and managed to get out of there under $100. I don’t think that’s ever happened. Still: a turkey, chicken, and some veggies= $98. Jeeze.

Wes has been really loving his solid foods. I picked up a few more organic squeeze packs for him and we’ve yet to come across a flavour he doesn’t like. The kid kicks his feet and grunts if you don’t feed him fast enough. Don’t worry, I didn’t let him have any wine- although, he was pretty keen on grabbing the glass! 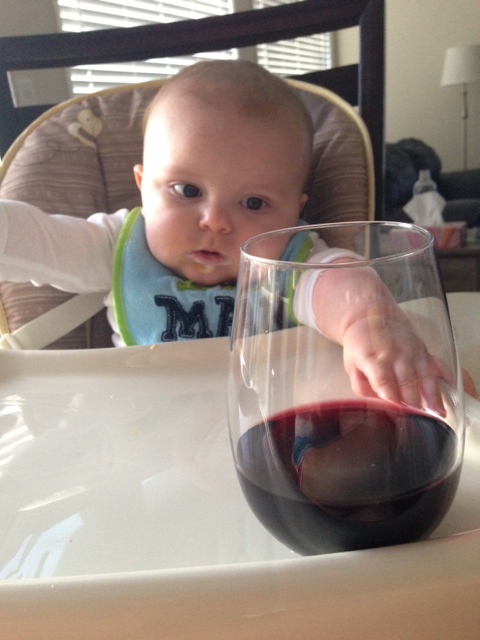 We’ve been practicing our tummy time and rolling a lot this week and he FINALLY did a completely unassisted flip from back to front (TWO of them!). To the non-parents, this is no biggie, but I assure you it’s the most exciting thing since sliced bread.

The pups were itching for a walk, so I caved and took them for a quick one around the block. The sunset was INSANE. 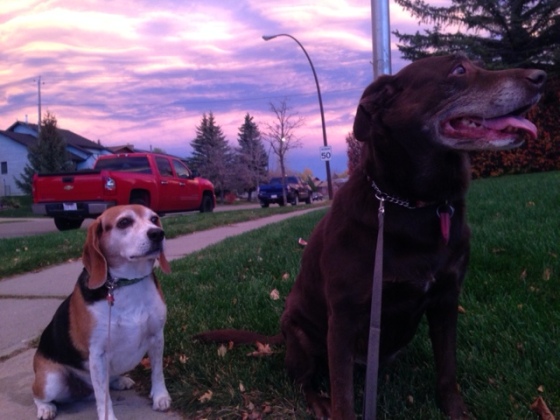 And that picture is facing east!

Wes fell asleep at 7:30 and we watched Spy before heading to bed. Tyler and I agreed it was probably the funniest movie we’ve seen in a long time.

Only difficult part is that it’s still dark as hell out until around 7:30, so it still feels like the middle of the night.

We enjoyed a nice long morning before it was time to head to Wes’s first pool class at the Y! I have to admit, I was pretty nervous about it- mostly for the whole locker room part. I wasn’t sure how I was going to manage with a baby who can’t yet sit up on his own. Luckily, it went pretty smooth and the boy loved the water. He was kicking and splashing a lot, just not smiling or giggling. He was mostly interesting in staring at everyone. 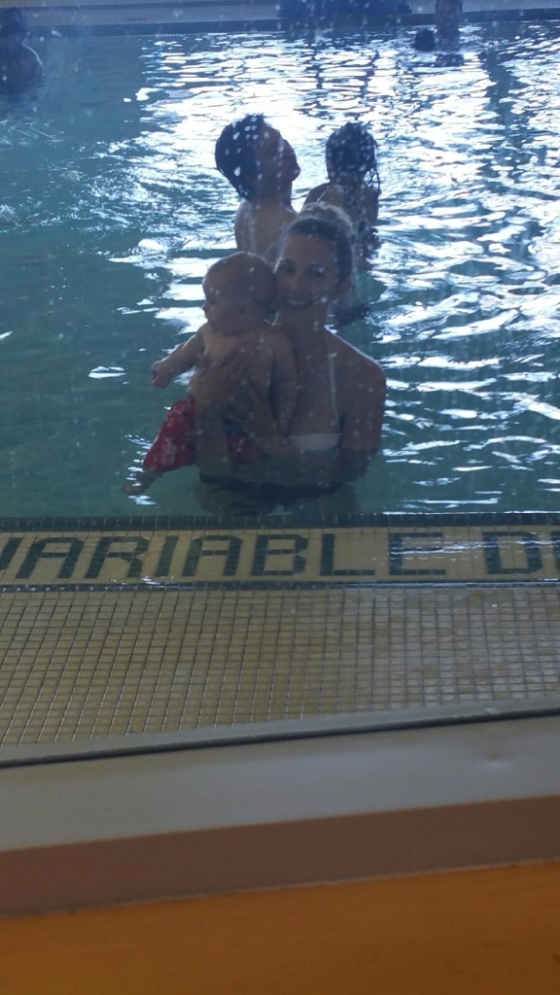 After his class, we ran to Rona where we left with nothing but Girl Guide cookies. These are the BEST cookies. 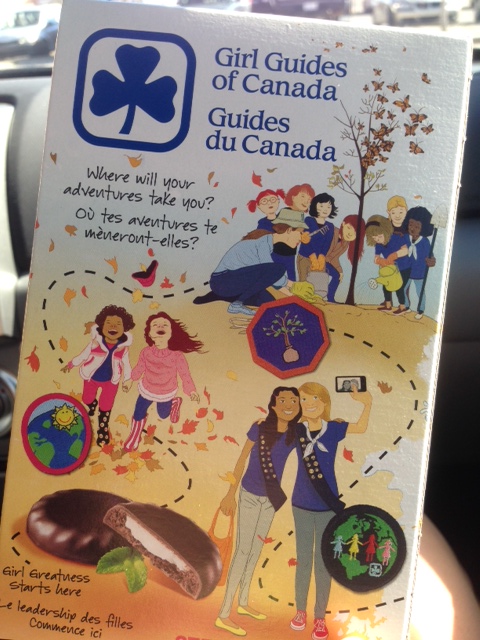 Then it was to Safeway for Thanksgiving fixings and Babies R Us for Wes’s convertible carseat. We got it for a pretty sweet deal. It regularly retails for $350, was on sale for $250, and we had $200 worth of Air Miles vouchers to redeem. Ended up paying only $60! Score.

Some fuel for all the shopping: 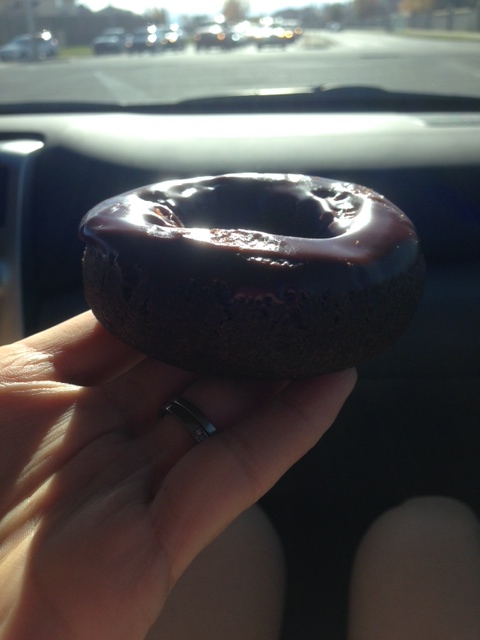 Then it was back to a few more stores for the essentials. 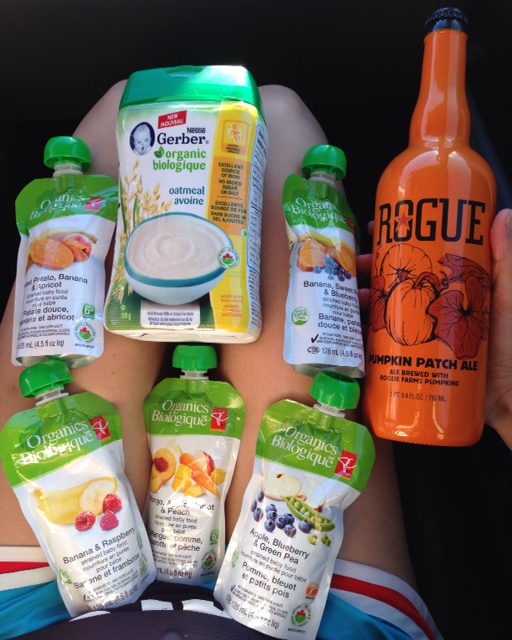 Does anyone get emails from Lucie’s List? I absolutely love them- they’re so helpful with Wes’s growing stages. Anyhoo- the latest email was about solid food and there was a lot of info on rice cereal vs oatmeal for babies and I was really glad to have read it (something about glucose yadda yadda in the rice. It made me *personal decision* run out and grab some oat cereal to swap out for the rice I had been giving Wes). And beer. Muy importante.

The evening was pretty good- we played around with Wes for a long time. The kid is seriously so fun to hang out with now– he rolls and giggles and well, it’s just the best. We enjoyed a delicious steak dinner, gave Wes a bath, watched Amazing Race, and I made brownies for Sunday. Once Wes went to sleep (8pm) I headed downstairs to get in my cardio workout then we watched Southpaw. 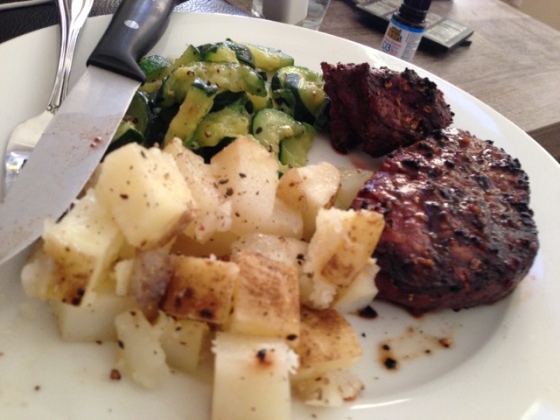 7am wakeup! Dare I say I’m getting used to this?

So, I think I was in denial that Wes is growing up because I’ve had him in the infant car seat in the stroller up until today. He napped while I took him for a walk and cried about him growing up. 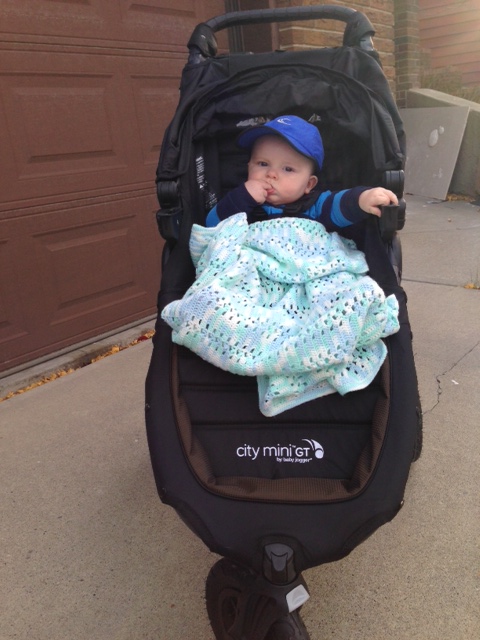 I have the Bob Revolution as well, but still have to take the adapter out of it from the previous owners. I really lucked out and found it on Kijiji for $150 and it came with the fleece liner, snack tray and weather shield! Can’t wait to use it for long walks instead of my City Mini GT (just to extend the life of it for future kiddos).

While we were out of the house, Tyler set up the smoker for our Thanksgiving turkey. 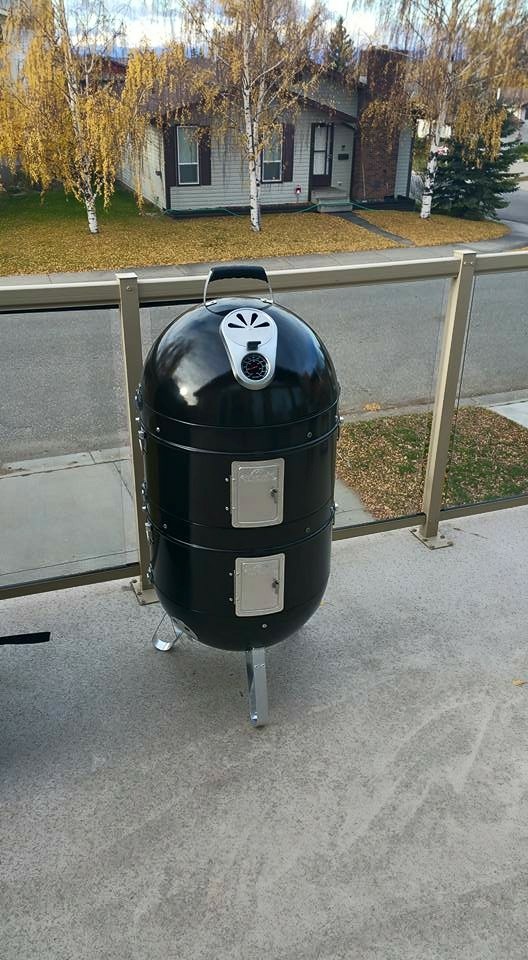 Then he made me breakfast. #besthusband 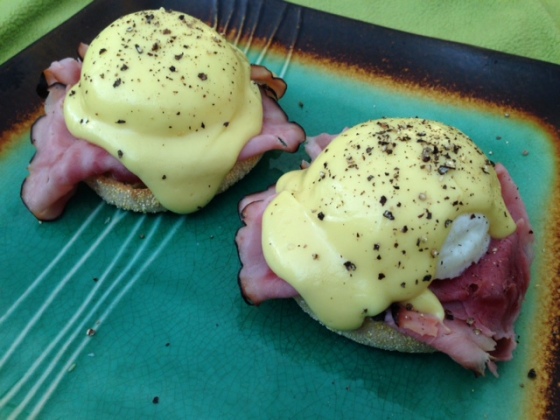 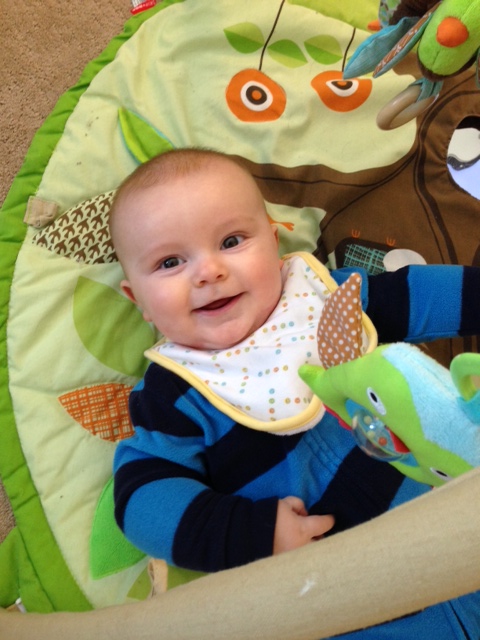 The afternoon was pretty low key. Wes napped, I worked out, Tyler watched football. Blah blah.. Then there was the turkey dinner! It was pretty good..I ate more turkey than I have in years, but not so much of anything else. There were carrots too, so there’s a veggie. And those brownies? They’re almost history. It’s gross how much of a sweet tooth I get. 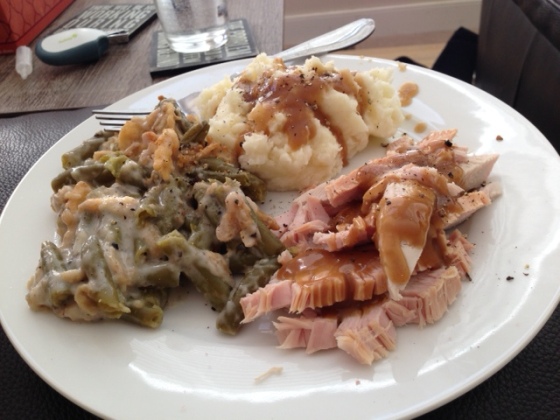 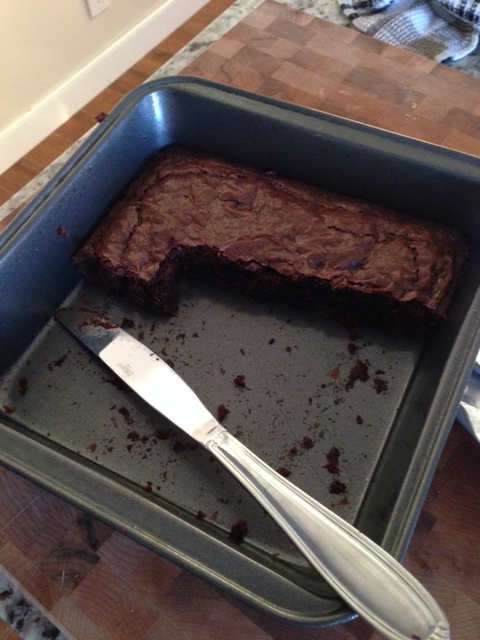 5:30am wakeup. Thanks, Wes. He ate and slept for a bit longer (giving him about a 12 hour sleep!) but I couldn’t get any more shut eye. As hard as I tried. Gave myself a big pat on the back for falling asleep so early the night before!

I think one of my favorite things about this baby is how he can look so peaceful in his sleep and simultaneously fart louder than a vacuum. 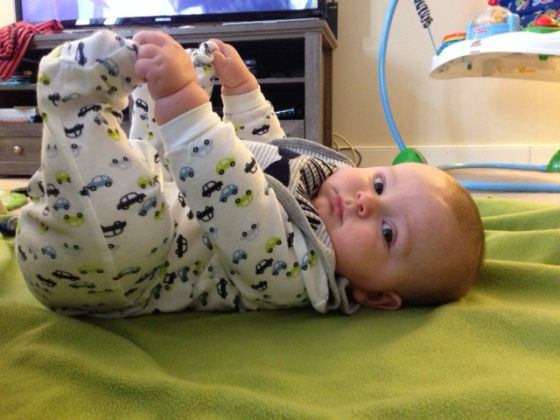 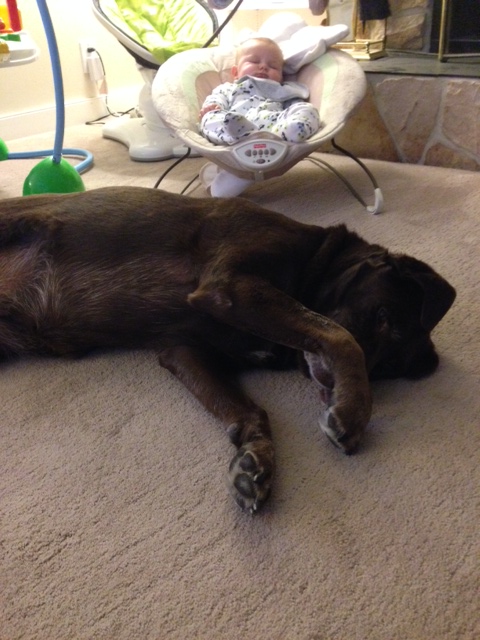 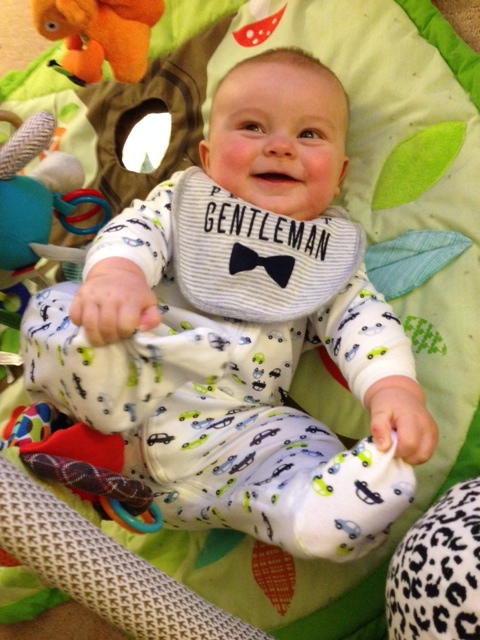 After breakfast, we went for a nice long walk then came back for more lounging. There were some naps- and it wasn’t just by Wes. I don’t think I’ve napped in ages and it felt glorious! Post nap, I finished the brownies. You know, to get rid of temptation. 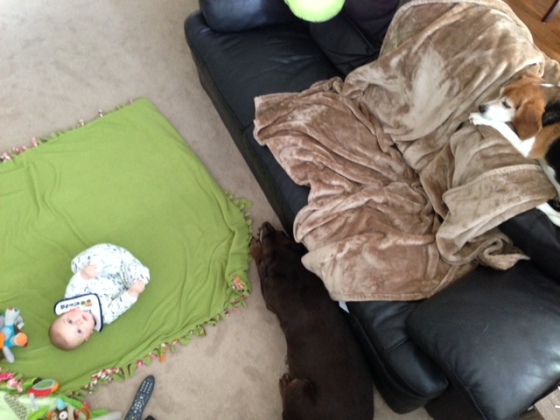 I roasted some sweet potatoes and zucchini to pair with leftover turkey for dinner then headed off to a spin class. It was a new to me instructor and I absolutely LOVED her class. 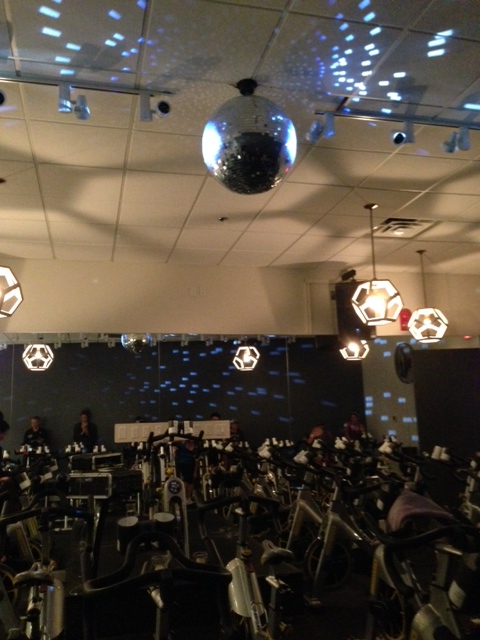 Any workout that can incorporate this song into the mix is a winner in my books:

PS: Remember how the beagle stole/ate a box of quest bars? Well, the last two have been recovered! And in vary precarious places, might I add. That means the pooch didn’t consume any of my $$$$ protein bars so I’m a happy lady.

How was your long weekend?

Take any group ex classes lately? What was it?!!