I somehow how a little time before getting food ready for the big game that I have decided to catch up on my recent things on these here blog.

I somewhat touched base as I was sitting in the Albany airport, but that doesn’t really count. Let’s rewind to Wednesday night…

Ok, so Wednesday night (my last night in New York) I got dressed after the workout I did at home and headed out to dinner at my FAVORITE local restaurant with mom and dad. 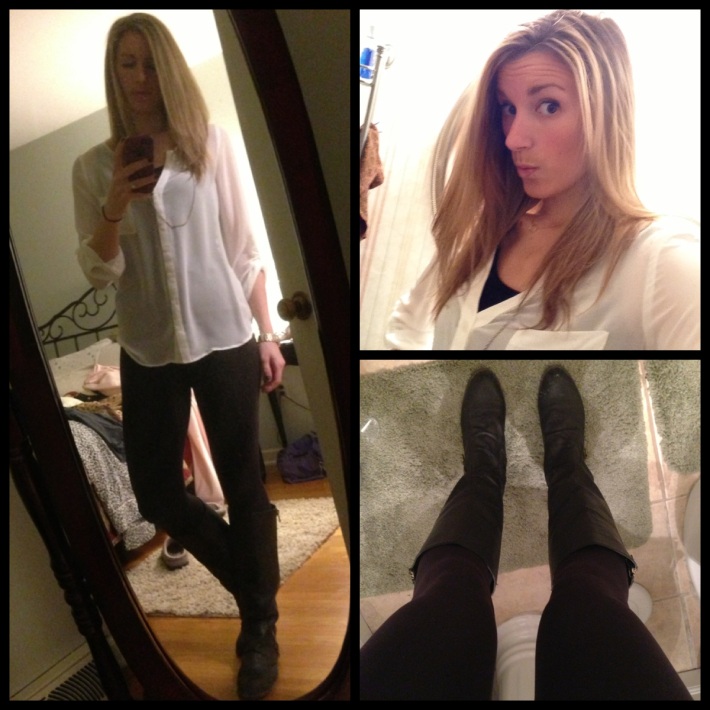 Outfit: American Apparel leggings and a top I scored from JCPenney. 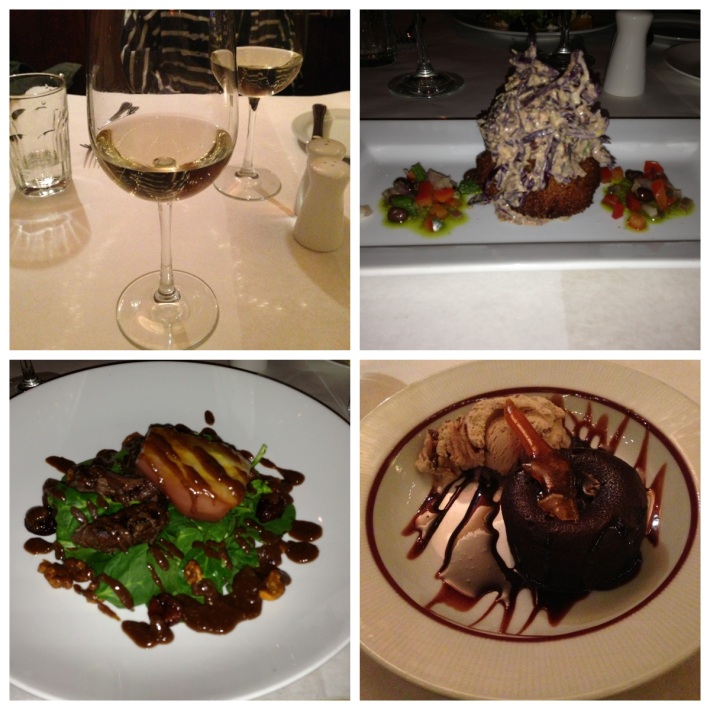 Dinner was at Bistro LeRoux. I seriously cannot praise this place enough. The food, atmosphere and service are all so fantastic. I ended up having Chateau Ste Michelle Riesling, 1/2 order of crab cakes, 1/2 order of poached pear salad with steak, and a lava cake with peanut butter ice cream. I’m not really good at writing about my full experience, but let’s just say that I was ‘mmm-ing’ with every bite. Ahhhh, so good! I can’t wait for my next visit home so I can go there again 🙂

As I was packing later that night, I came across my high school prom dresses. Feel free to laugh at how ugly they are!

That really concludes my trip home. Although, I did manage to wake up at O-dark-thirty on Thursday morning to get in a 40 minute run on the treadmill. I watched a Jillian Michaels infomercial to keep me motivated.

My trip home was a long one. Having a layover in Chicago in the middle of winter is practically a death sentence. My first plane was 45 minutes late, but made good time getting into O’hare. I chilled out for what was supposed to be only a 2 hour layover and had me one of these suckers:

I also had a steak salad, but didn’t take a picture because I was hungry and ate it. Duh.

I then walked all over the terminal not only for exercise, but also because the incoming plane for my gate was super delayed (I was also on the prowl for some good chocolate).

Well, I didn’t fin the chocolate that I wanted, but I ended up settling with a bag of these: 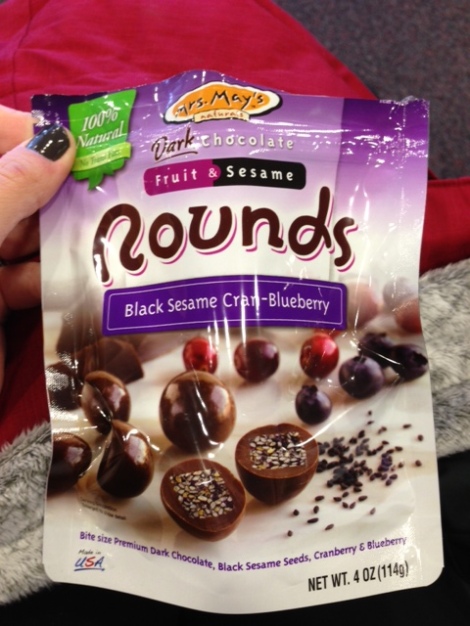 But they are SUPER WEIRD on the inside.

I also managed to take advantage of the DUTY FREE shop! I have never done that before, so it was an interesting experience. 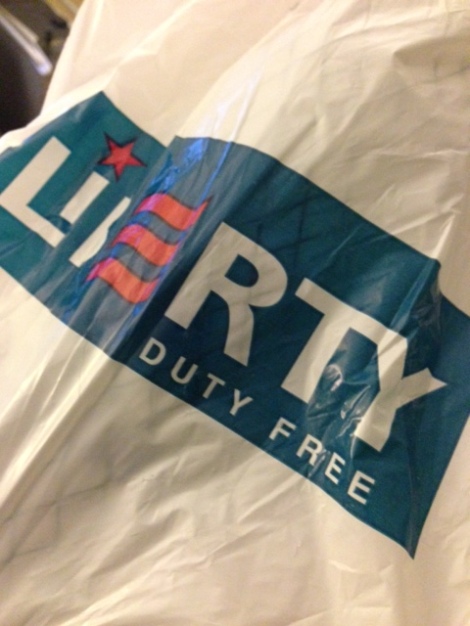 I made my purchase, showed them my boarding pass and ID, then got a receipt with a pick-up tag. The attendant would then meet me at my gate and hand me my purchase as I was boarding the plane. Nothing like being able to carry a big ass bottle of Grey Goose on a plane!

A few hours later, I was home and reunited with my puppy!

And now begins the dog pictures. You have been warned.

Friday, I was left at home to get back into my routine. The morning was filled with lounging, house-things, and puppy cuddles.

My workout was the Endurance workout from Best Body Bootcamp (supersets of exercises to be repeated until you reach 100- same as last Friday). I busted them out as I watched recorded episodes of The Mindy Project. After I ran out of episodes- and finished my strength workout- I headed over to the gym for a sweaty 14 miles on the bike. I really missed the Keiser bikes while I was in New York. Oh right, and Layla joined in on my strength stuff. Forgot to mention that.

She was so excited to see me put my coat and shoes on to go to the gym, that I felt bad and ended up taking her for a walk as soon as I got home. She was kinda rude about it, but whatever.

Apparently I didn’t take her on as good of a walk as Tyler has been doing the last few weeks, so as soon as he got home, she was all over him. Traitor.

We rounded out the night with tacos and watched Flight (so glad I waited until after my trip to watch that movie!)

On to Saturday. Bacon and eggs for breakfast. YUM. And lots of coffee. YUMMx2. Then errands.

One of our stops was the mall so that I could pick up my earrings from Tiffany & Co. I had dropped them off last month when one of my screwbacks kept popping off. As the associate unwrapped my earrings, I noticed that not only did they not replace the backing, but they completely reset the diamonds in different posts WITH different (ugly) backings! And the backings wouldn’t even stay on the post! I tried to be as nice as possible, but it was pretty upsetting that they made all these changes without my knowledge. I ended up leaving them there until the Ops Mgr calls me to discuss possible solutions. Fingers crossed I get a free upgrade.

Blah. That was kind of annoying to type. I just want my friggin earrings back!

My workout for yesterday was supposed to be ‘cardio of choice.’ I chose to do a mish-mash of things at home. I did alternating kickboxing and strength moves and finished up with 100 burpees. 100 BURPEES!! Rather than breaking it up into sets of 10, I wanted to bust out as many efficient burpees as I could. I would do as many as I could with the best proper form, record the number, and take a quick break before attempting more. After 15 attempts, I hit the 100 mark. I’m totally going to do this throughout February. I’m starting to love burpees again.

And again, Layla joined me.

Once my workout was complete, I quickly cleaned up and Tyler and I headed to the Flames game! Tyler got tickets from his boss, so it was a sweet (and free) way to have a nice little date night. And of course we enjoyed beer and hot dogs.

The game was actually close, but the Flames lost in a shootout.

Which brings us to today. 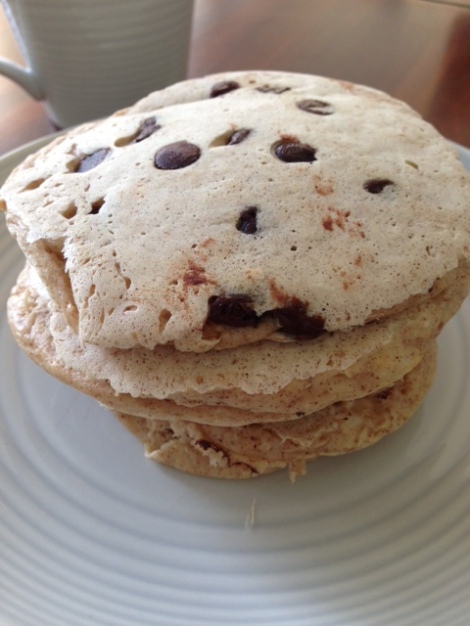 I was planning on topping with a tiny bit of pure maple syrup, but they were so moist and gooey that it really didn’t need it. Go make these now.

Now I must go put cheese on chips and chips in dips. And watch football.