How is the weekend over already? I swear to God it was only two seconds ago that I woke up and was excited to eat pancakes! Another low-key weekend for us..dang cold weather is keeping us indoors more than I’d like.

Friday: Pancakes in peace. Wes didn’t wake up until almost 8:30 so I was able to clean up the kitchen, make breakfast AND eat it in peace and quiet.

I took a peak out the blinds and noticed how frosty white everything was! I opened the patio door to snap a pic and WHOA- it was pretty but FRIGIDLY cold out. Brr

Wes’s first tooth even poked through! It’s very tough to see, but it’s there. So of course, photos were taken to celebrate. Love this sweet little boy! 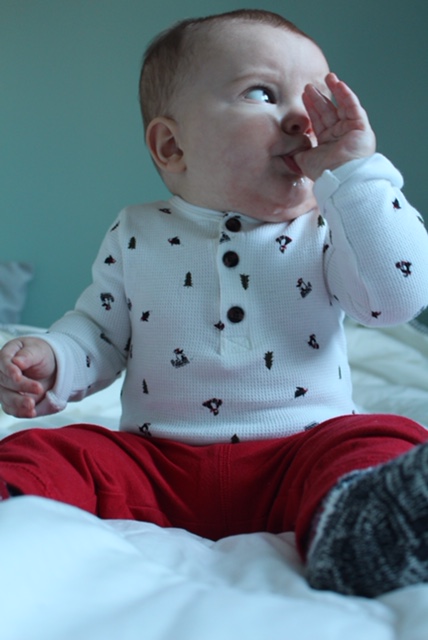 We braved the cold to run some errands- Co-op had a great sale on Vega so I had to make sure to pick some up. Wes wore his dino hat- I really need to take a pic of him in it because it’s so cute and I can’t help but laugh when he’s in it.

I was able to watch more Making A Murderer while Wes went down for a nap. BONUS: I had a Wild Rose Brewery Cowbell to enjoy while I watched! Tyler spent a good chunk of the evening painting all the trim we had picked up last weekend. Do home renos ever end? The guy is seriously busting his butt ALL THE TIME with something around the house! (PS: Thankful for that. I’ll stick to doing laundry and cleaning the bathrooms, tyvm)

Dinner was super simple: Chicken roasted in Mums (<—SO GOOD), potatoes and broccoli. We watched a few episodes of Homeland then went to sleep.

Saturday: Did I mention Tyler’s the best? He pretty much TOLD me to take a bath before Wes went down for his nap and to take as long as I wanted. I used one of the bath bombs he got me for Christmas and abused some me time for a whole hour. It was glorious.

During the afternoon, Tyler did more work on cutting and installing some of the trim while I took Wes grocery shopping. We played around for a bit when we got home, then I took the dogs for a walk while Wes napped. 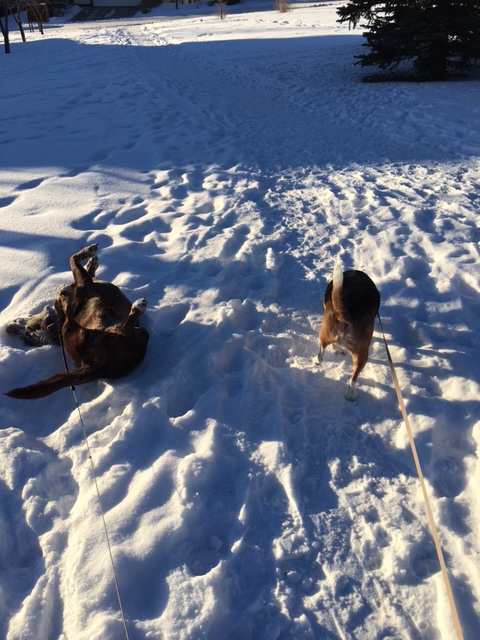 Tyler made lasagna for dinner- we stuffed our faces- then plopped on the couch downstairs to watch The Intern.

Sunday: The lasagna didn’t agree with me so well, and I wound up getting sick during the night (could’ve been the mix of that plus the prosecco I drank during the movie?) Yuck. I took a SUPER LONG nap in the morning then made myself a delicious brunch plate.

We had the games on downstairs while Tyler was in/out of the garage cutting more trim. We’re a split household–> I’m a Seahawks fan and he’s a Vikings fan, so the game was pretty intense to watch. Not gonna lie though, I was sorta rooting for the Vikes because they have been having a pretty great season. Bummer ending…but my team’s still in it! 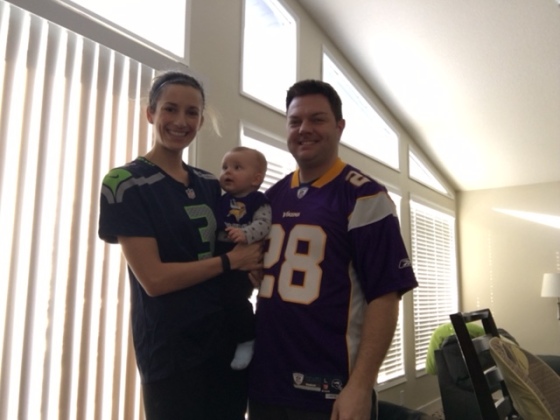 During halftime, I decided to throw together my first ever batch of baked doughnuts! I chose to use this recipe– it was so simple to put together and they turned out GREAT. Like….super.freaking.delicious. Dare I say better than Tim Hortons? Yup.

I will definitely be making this again in the VERY near future. And then all different kinds. I’m predicting a donut phase. Any flavor suggestions? Recipes to share? Send them my way, please! 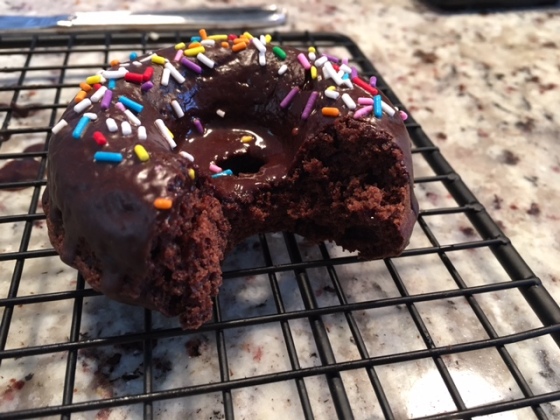 After these were done, I exercised extreme self-control by heading downstairs to workout BEFORE enjoying one…or two…of them.

We had Mucho Burrito for dinner (I’d much rather make food, but we were both STARVING and didn’t want to wait for meat to thaw. And we didn’t really want to cook either). Wes had dinner, his bath, then continued his weekend adventure of attempting to get on his knees to crawl but mostly managing to only roll all over the place.

The dogs got a walk before bed, but we sort of jogged it since I wasn’t much in the mood to be outside. Poll: Is anyone else guilty of keeping their PJs on under warm layers? I do it almost every time I walk the dogs.

How was your weekend?