Friday- all I really did was take naps. Since I could barely move, I figured that sounded like a pretty good itinerary. I mean, I’ve earned it?

Damn right I worked hard. I pride myself on being super fast and efficient in my tasks and feel slightly bummed that I had to abruptly hand over my duties to my not-yet-ready replacement. Can’t worry about that now!!

Saturday- I got up at the crack of dawn and baked banana bread (using this recipe). Unfortunately, it didn’t turn out as well as my last loaf, but it’s nothing that a good slather of pb/nutella/butter can’t fix!

Tyler and I then had our second childbirth class at the hospital. There’s a ton of good info, but I HATE hospitals, so I just get a bit of anxiety thinking about being hooked up to a bunch of crap and well…just being in the hospital in general. I’m hoping that everything is smooth sailing so we can get in and out of there as quickly as possible.

Best part of the class: the instructor is HILARIOUS. She’s a retired OB from Argentina who is not afraid to make the men in class feel as awkward as possible. And I love it.

We finished off the day with a great steak dinner at home and watched Exodus in 3D with our snazzy glasses. It was trippy being able to watch a 3D movie at home on such a large screen. The movie was good but not too thrilling since my Catholic education pretty much gave away the ending. (that’s supposed to be funny.)

Sunday: I met my friend Susie for brunch at Nellie’s in Kensington (decided to get out of the house for a bit before the pain really kicked in for the day). All I really wanted was the bacon. But I managed to eat the eggs and fruit too. Hashtag healthy. 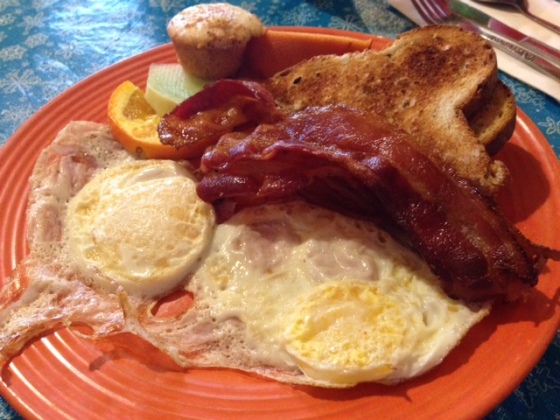 And I sold my very first thing on Kijiji! What a sad accomplishment. But in all honesty, I never really had anything worth selling since I moved to Calgary with none of my things except for a potion of my clothes. But, I managed to sell my monthly transit pass pretty quickly (hey, it’s $99/mo and I only used it for a couple days!)

The rest of the day was filled with laundry and laying around the house…while Tyler did a ton of household chores AND installed the car seat!

How was your weekend? Best thing you did?