Already? And yet, I feel like I’ve known him forever. Crazy.

I apparently did a crap job of makeshift weighing him at home last month, because both his 4 month doctor appt and 4 month shot appointment confirmed he weighs 17lb 12oz. He’s about 25 inches tall and has a LARGE head. We have him in size 3 diapers and most clothes are 6 months (sleepers are 6-9 mo, depending on the brand). 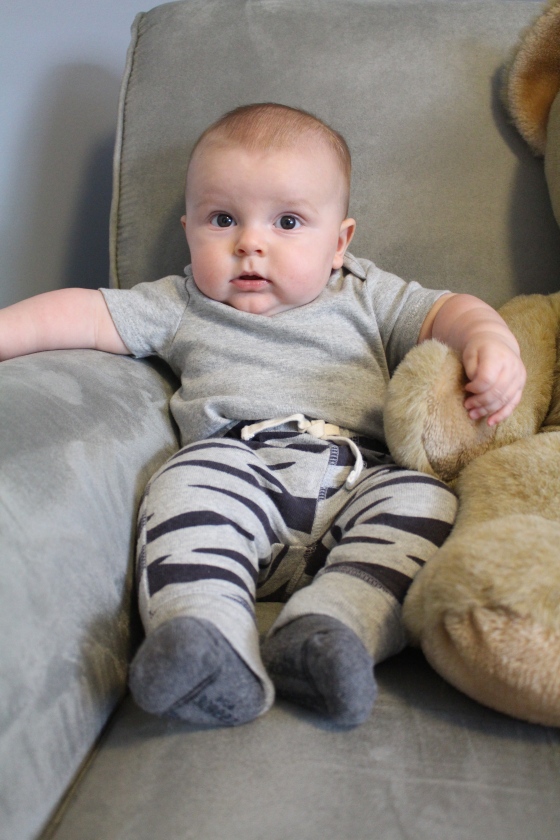 He pretty much doesn’t nap during the day. If he does, it’s while we’re in the car, or about 30 minutes after feeding on my lap. I’ve tried to get him used to his afternoon nap in his crib which is slowly getting better and better- he calmed down in about 10-15 minutes and will sleep anywhere from 15 min-1 hr. Bed time is 9:30 and he loves to have his milk from a bottle before going to sleep.

If he only has a few of these short naps, he gets pretty cranky in the late afternoon and our evenings are spent doing “Wes Management’. Although, I think that’s synonymous with a little thing called ‘parenting’. Throw in a beer here and there and it’s pretty doable.

He sleeps through the night until 7:45-9am and has put himself back to sleep on a number of occasions. <–GOOD KID.

He is super drooly and sucks on either three of his fingers at a time or his thumb. He loves going for his thumb in the tub because it’s wet and makes a loud suction noise. And yup, he still loved his baths. He will stare at himself in the mirror or splash like crazy the entire time and doesn’t get upset when we go for his face or ears.

He has DEFINITELY found his voice and is getting his floor exercise in on the regular. Lots of screams and shouts and giggles and jumping jacks while he’s on his mat.

Wes has also started to grab for things, put said things in his mouth and rotate his head to constantly look at what’s all around him.

His eyes are turning brown! Yay!

One of my favorite things about him from this month is his eating technique. He either looks like he’s telling my boob a secret or that he ‘literally can’t even’. (aka: hand on top of his head as if eating is actual WORK)

The boy NEEDS to move at all times. I think I’ve probably spoiled him because I hold him all the dang time and he screams bloody murder when he’s first put on his mat or in any of his seats. Except he loves being on his changing table and often gets pretty talkative and kicky.

I’ve bought him a few more toys which he loves. But then again, handing him a blanket or a burp cloth seems to be equally exciting.

His is now officially a dual citizen! It’s really not that much paperwork, but I’m glad that it’s all done and we won’t have to update either passport for the next 5 years.

We’ve been working on tummy time and he’s now more comfortable being on his belly, but that noggin is still a bit too big for him to hold up for any extended period of time. He rolls from his back to his side a lot and props his legs up on the arms of the playmat, so I’m assuming we’ll see some flipping soon.

We’ve taken him out for a few nights and he is wonderful- always pleasant to be around and pretty content for the most part. It’s probably due to the fresh air and different scenery. (I get it, the living room is getting pretty BORING to sit in all the time. Although, the thought of going back to work in April makes me want to vomit.)

All in all, it’s been super fun this month to see him start to develop some motor skills and a bit of a personality. Which reminds me, my fart noises have rubbed off on him and that’s the only sound he made for a good 2 days straight. Also, real farts. THE SMELL! 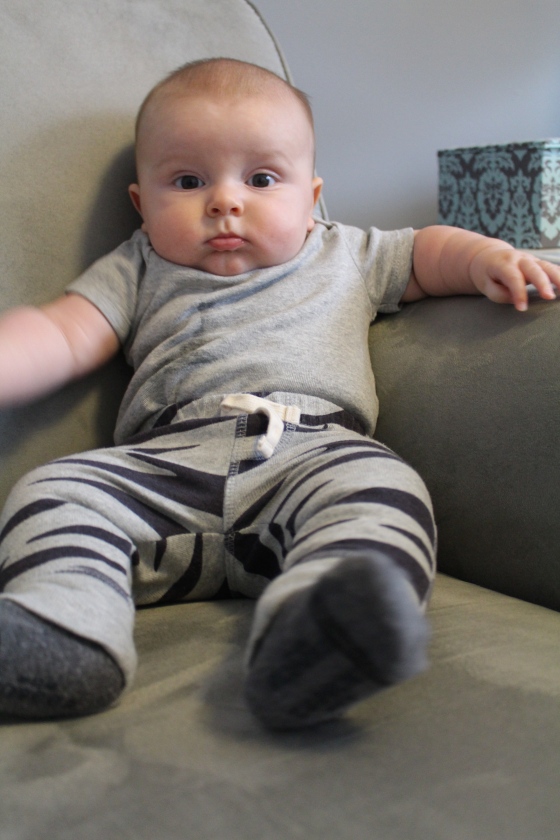