Holy h-e-double hockey sticks. I can’t believe how fast time has FLOWN by with this little man. Just to think that this time last year I was already off work on short term disability and laying on the couch all day watching Scandal on Netflix, eating Nutella, and waiting for my baby boy to get here. (I guess life is pretty much the same with regards to the couch sitting, Netflix watching and Nutella eating;) ) 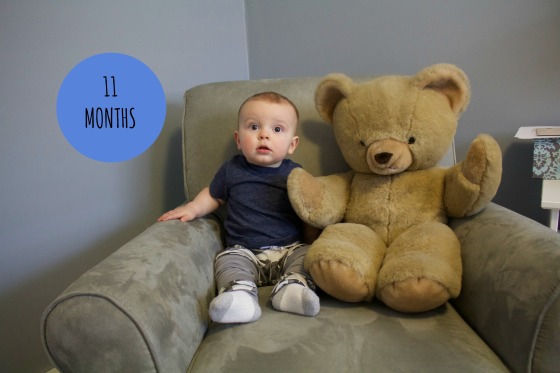 So here’s where we’re at: the kid is a blast. Like, I’m pretty sure there is no better kid out there.

He’s still in size 5 diapers, 24mo clothes, sleeps 12 hours through the night, and eats just about anything that’s given to him. 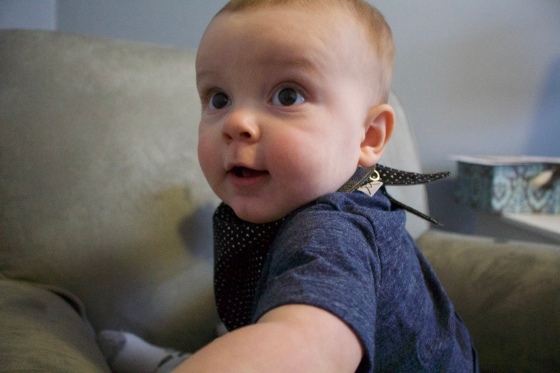 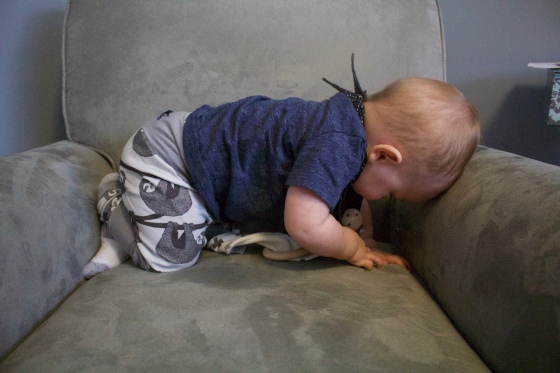 He now has five teeth and loves to eat crunchy snacks. Most notably: MY goldfish crackers. Guess it’s time I learn to share. (Except I did just buy him some Annie’s bunnies only because they’re slightly healthier for him. Plus, no sharing required.) He sucks down smoothies like a champ, loves fruits and veggies and those GD puffs. He’s still not a huge fan of meat, but will tolerate some turkey meatballs or pulled pork now and again. Eggs are still having him make a yucky face, but he’ll eat a few pieces before moving on to more delicious foods.

He’s no longer breastfeeding. February 24 was his last feeding, and on the morning of the 25th, he just didn’t want it anymore. I am super sad about it, but it’s nice to know it was his choice. (Don’t get me started on how crazy my hormones/metabolism has been since then. ALL.OVER.THE.PLACE). He’ll have a bottle in the morning, one in the late afternoon and one before bed and we’re slowly integrating some milk into the formula. 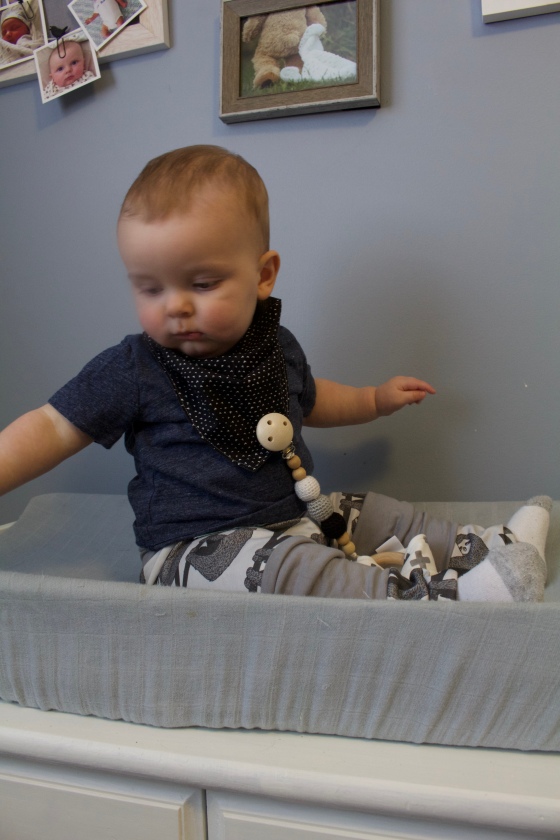 He’s successfully mastered getting up on all fours, but no forward-crawling yet. Most of his ‘travel’ is an up-on-all-fours-twist-around-and-repeat motion. And he even more recently started using the couch or the fireplace to get up on his knees! Which means we really have to get our butts in gear and buy some gates and baby-proofing stuff.

Plus, this whole almost-crawling business makes it darn near impossible to get any non-blurry photos of him! I need to learn how to use my fancy camera better so I can avoid this! (ps: anyone have any tips or tricks on how I can achieve that?) 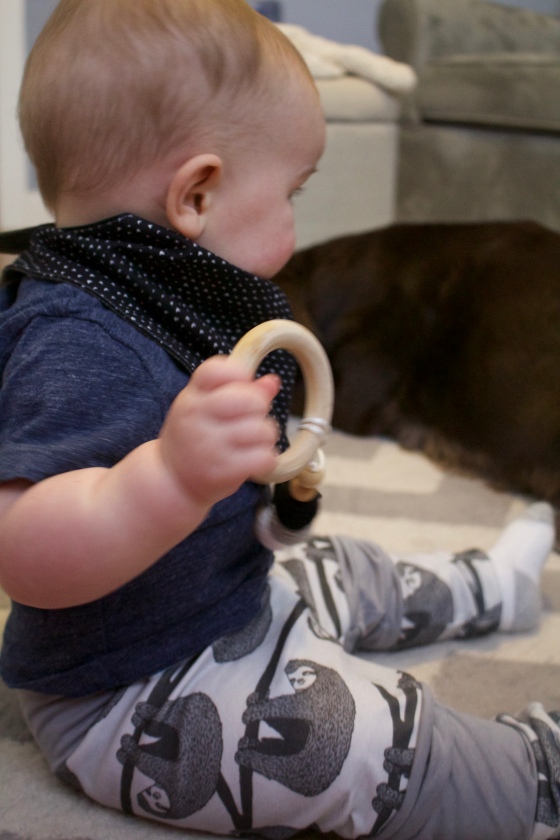 He’s down to one nap a day most of the time. This transition was a bit harder for me because it meant less of a mental break during some of those long days. But less napping means earlier bed time, so no real complaints from these parents 😉

I’ve started to stress a lot less about getting out of the house with him as well. Before, I wanted to always make sure we were home for nap time and for meals. But then something in my head clicked and I realized this little man is going to have to start learning to roll with the punches..plus, it just takes a bit of planning with packing food! We’ve gone out for some pretty long stretched of time and it has been SO nice.

Oh wait, this is a Wes update. Not a me update. Moving on..

It has been a lot of fun watching him develop! He now stacks toys, intentionally groups them, and throws all the balls. (I stepped on my first toy last week. It was a triangle shaped wooden toy and it hurt like a SOB..and even left a large bruise!) He’ll also hand us things and then take them back. I say I think it’s fun now, but I’m guessing it’ll get old really quick as I expect this will be an ongoing trend for the next few years. Oy! 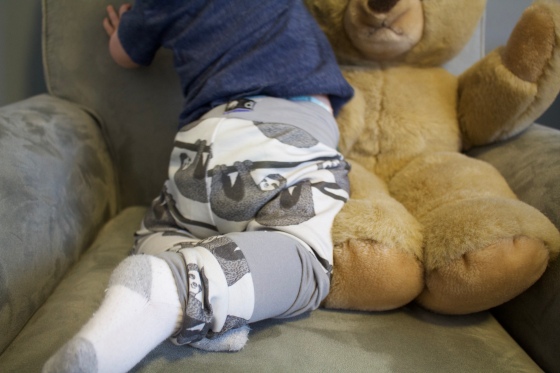 This month, he has really hated being put on the changing table and will cling to us like an upside down sloth as we try to lay him down. How appropriate his 11 month outfit include sloth pants.

And he has had a few fits when Tyler picks him up..mostly because it makes him think it’s bed time!

But then all we have to do is throw him in the blue car and he starts screeching with excitement. Now if only he would stop snagging all the dishtowels from the stove when he drives through the kitchen… 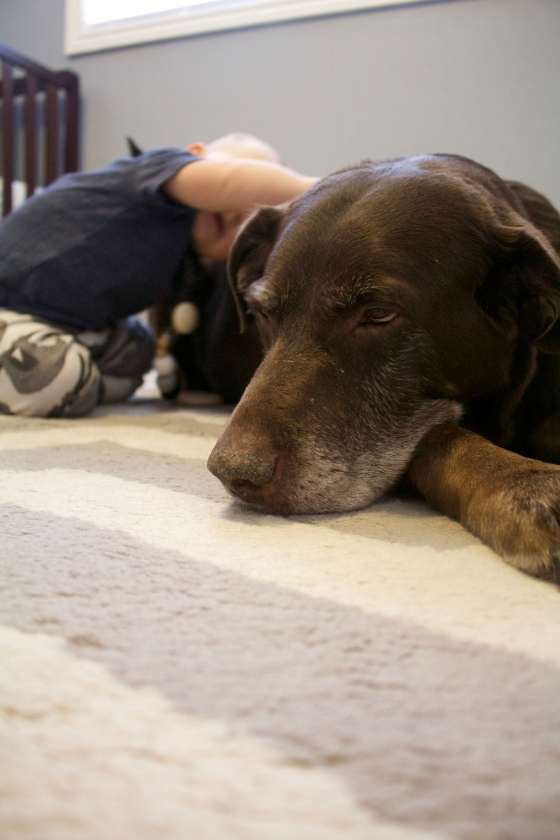 As far as dogs go, he still loves them. More obsessed with Layla because she’s on the floor more then His Highness Reggie who is always on the couch. Lots of snuggles and kisses and fistfuls of hair.

I’m still working on having him say mama…At first it was a bunch of dadadadada’s, but now its evolved to rarararara so I’d say there’s progress. He’ll also mimic certain noises we make to him which is entirely too entertaining! 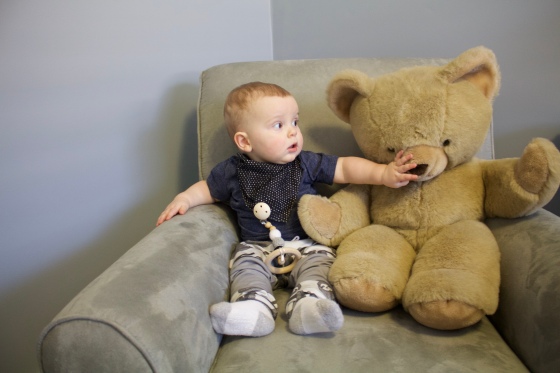 I can’t believe the next update will be for his FIRST BIRTHDAY.