Tanner, my sweet boy. How is he 7 months old already?! It constantly blows my mind that we are a family of 4 and that Tyler and I are allowed to be in charge to two tiny humans. Every single … END_OF_DOCUMENT_TOKEN_TO_BE_REPLACED

I can’t believe how big this boy is getting to be! I ‘unofficially’ weighed him on our home scale yesterday and he’s clocking in at 21.5 pounds- not too shabby!

He’s breastfed 3 times a day, has 2 solid food meals (about 1.5 squeeze packs per meal + oatmeal) and a bottle before bed. So yeah, with all that food, he’s producing some major craps. All’s healthy in that department. He’s taken a liking to pooping as we change him, so that’s been fun. He’s still not a fan of meat even though I’ve tried hiding it in other foods. It’s like his tastebuds just KNOW and he immediately gives a huge YUCK face and sticks out his tongue for me to get it out of his mouth. 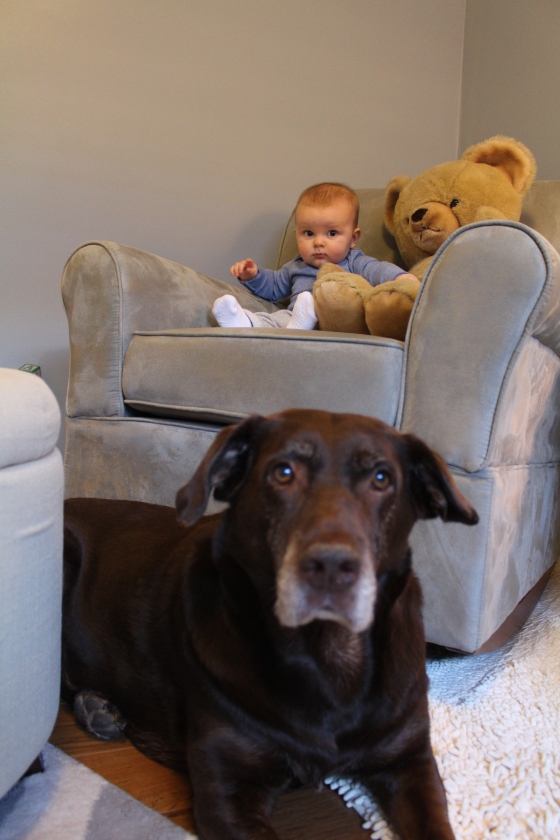 He going to bed around 7/7:30 each night, sleeping until 7/7:30 the next morning. Only a few times has he woken up early in the morning for a feeding then gone back to sleep. His naps are still varying in time and length, but there’s usually a morning nap that’s anywhere from 45 minutes to 2 hours and an afternoon nap that’s 1-2 hours.

He has started to sit up on his own, but he’s still a bit unsteady and I have to sit behind him just in case. But his rolling! Man, he rolls like a fiend. He had already mastered the back to front roll, but this month he finally got a hang of the front to back. And has even steamrolled across the living room floor a few times. His dexterity is really improving and he grabs for things with both hands and can use his fingers to properly grasp a ring or his toys OR MY HAIR/BOOB. Oh, and he flipped over in his crib. Insert huge mom paranoia here.

Wes is still blowing tons of raspberries and babbles a LOT. As far as I can tell, he likes his pool class, but it mostly staring at everyone else in the pool. He kicks his feet and splashes a bit, and just this past week started bobbing his face into the water (HILARIOUS). During bath time, he’s transitioned from staring at himself in the mirror to jamming a washcloth into his mouth and sucking on it loudly. And the grunting! It’s not always when he poops…grunting is weird. 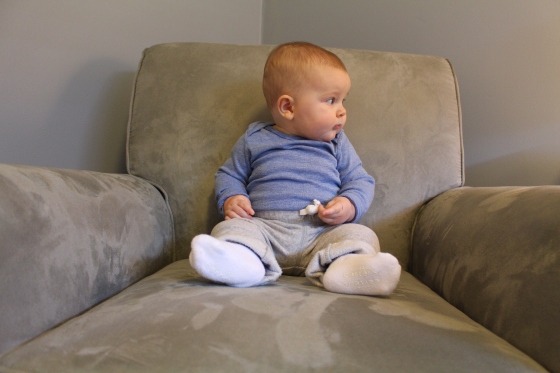 We’ve been reading a lot of books, too. I can’t tell if he 100% likes it, but he tolerates it. I mean seriously, it’s not like he can just get up and leave when I read to him…. I’ve read a lot of the Dr. Seuss books to him (ps: can someone tell me how to stop rhyming everything I see in my head now? It drives me crazy!!) and some other random ones I’ve found at the library. He loves to turn the pages of board books and his very favorite is the Dog book that has fuzzy pages and pull-tabs.

Oh, and singing. I sing to him a lot. About everything. I sing about making his food and changing his diaper…you name it. My classic go-to for nap/bed time is Do-Re-Me. Confession: He was extremely fussy a few days ago so I *might* have changed to words in the song to “go the fuck, the fuck to sleeeeeep, go the fuck-fuck-fuck to sleeeeeep’ Sing that in your head about 2309572 times. It gets funny. #goodmom #iswear

It might not look like it, but he’s getting a bit more hair. He’s wearing 12/18/24mo sleepers and 12/18 mo onesies and pants. You can forget about me buying him any shoes because his ankles are CANKLES and I’m not going to bother under he’s a bit more mobile. I don’t foresee him running any marathons anytime soon, so I’m not worried. PS: Hats are my favorite. He’s currently wearing 12-24mo in hats and I want to buy him all the hats. HATS. How many times can I say HATS? PPS: If you have any extra hats laying around, please send them my way.

Wes has started to get the hang of patting the dogs. Although, he tends to pat then GRAB so we’ll have to work on that. Layla tolerates it, but Reggie can be a bit temperamental, so I don’t want any accidents there. He giggles at them when they walk by and/or do something naughty. 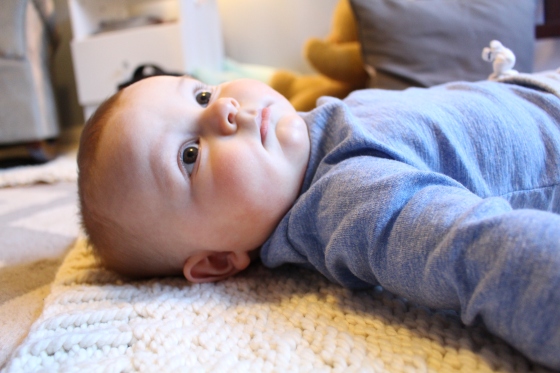 His eczema isn’t so bad anymore, mostly because he’s strong enough now to stretch out his neck and get fresh air onto the skin more often. He usually prairie-dogs his neck when he’s sitting in his high chair. I can’t tell if it’s to look at what’s in the kitchen, or if he’s mimicking how he poos? Who knows. Eww, did I go too far there? 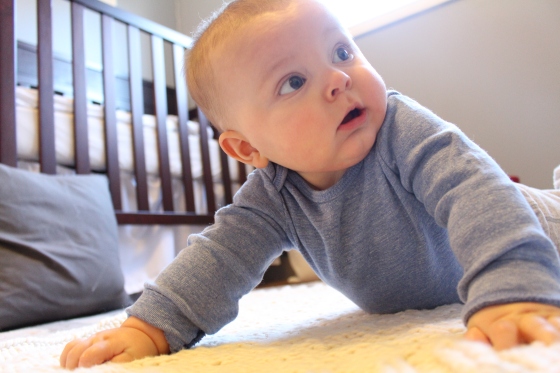 I can’t wait for the day when he purposely smiles for the camera! Kid always looks so dang serious in photos. He will reach for my phone when I’m taking his picture- just no smile. womp.

He loves to bang on the window (which drives the dogs nuts).

Wes likes to be thrown in the air and bounced around A LOT. Sometimes when I’m trying to get him to sleep, I might accidentally have too big of a bounce in my step and he loves it so much, he’ll go from drowsy to nonstop giggling. Then I face-palm myself and have to start all over with the getting-to-sleep process. It’s worth it though, because he’s so dang cute. 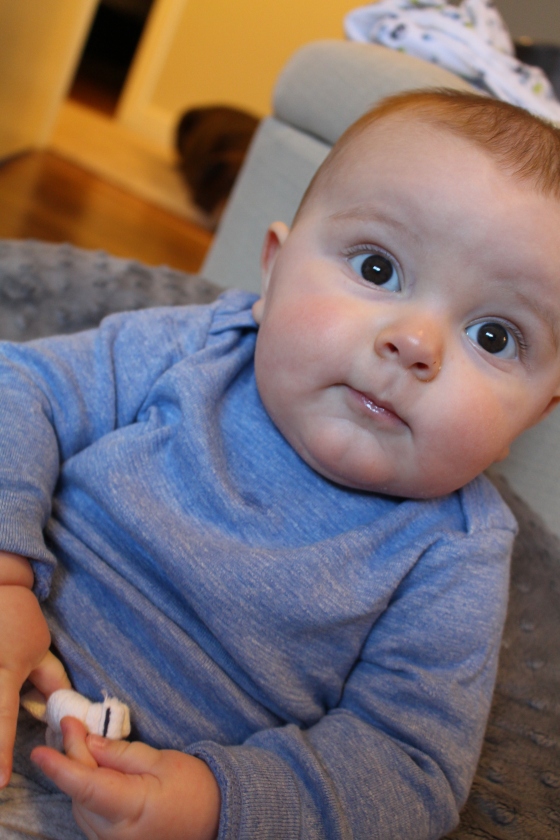 Oh- he finally got his feet in his mouth! Babies are so flexible. And he found his wiener. SO WEIRD- he grabs for it whenever he’s naked and sometimes will scratch at his diaper. What a boy.

And he’s still a totally mama’s boy. Needs me in his sight 24/7- preferably held. Another thing I don’t hate at all. In fact, I usually hold him an additional 5 minutes after he’s fallen asleep because I can’t stop staring at this cute little boy and thinking of how lucky I am to be his mama. 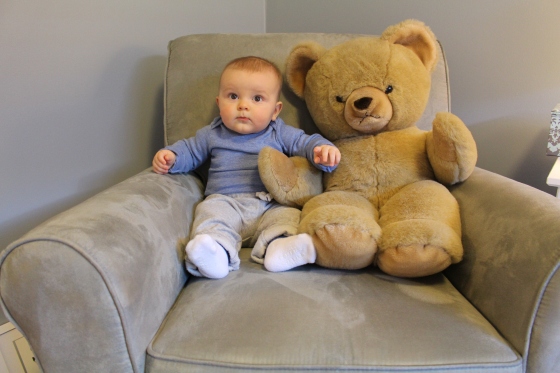