So this weekend was pretty fun! On Friday, we went to Costco to stock up on everything and watched The Gambler. Not super exciting, but it was a pretty sweet family outing even if it was only to spend a month’s salary on bulk items.

Saturday morning was pretty lazy around the house, but then we had friends over for dinner! I managed to splurge on a glass of honey sangria too. #winning. Wes was well-behaved the whole night minus one or two screams. 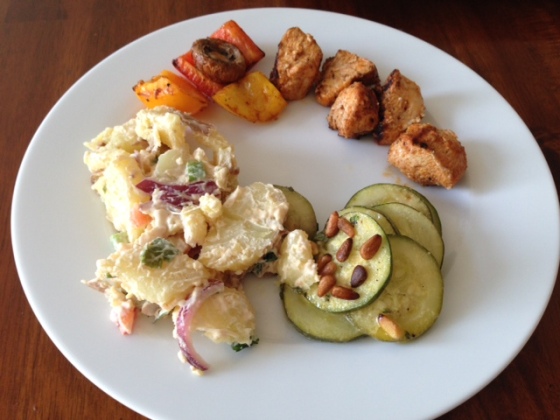 Despite staying up until 1am, we got a decent amount of sleep.

Sunday morning was another lazy morning.

In the afternoon, we headed over to a friend’s house for a BBQ. Wes was PERFECT. He slept the whole time, minus a feed. Actually, I’m pretty sure he slept through that too. The weather was absolutely gorgeous and I think he enjoyed the fresh air for a few hours *noting that for future reference.

When we got home, I walked the dogs and squeezed in a pretty late workout. Since I wasn’t too tired, I stayed up while Wes was in the mamaroo so that I could give him a late night feed before moving him to his crib. Good idea on my part, because he ate pretty fast and was out like a light.

Yesterday (monday) was a great Wes and Me day. He slept while I made muffins and did some chores around the house. When he woke, I figured he might want some more fresh air, so I threw (no I did not actually throw him) in the stroller and went for a 40 minute walk. I was a sweaty beast by the end of it, and he was babbling in his sleep for the last 10 minutes.

The rest of the afternoon he was AWAKE so my focus was on him. Then Tyler came home from work and I took the dogs for a 45 minute walk, we watched this week’s episode of GOT, and I did my workout. HERE’S MY FAVORITE MOMENT YET: Wes went to bed at 11:30, woke up at 4:40 to feed, back to sleep 20 minutes later, and slept until 9am. THAT GAVE ME LIKE 8 HOURS OF SLEEP. Even my fitbit app told me so.

Here’s to hoping this becomes a trend!