My little baby man is two months old today! When I think about it, I either cry because I miss him as a newborn and I haven’t slept in two months, or I gush over the fact that I’ve been head over heels for a poop machine for that long. 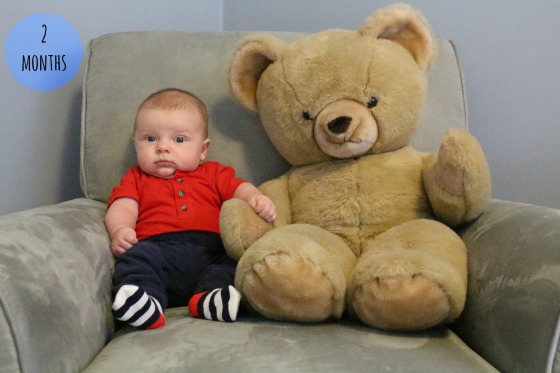 His stats according to the doctor’s appt we had this afternoon–> height: 24″; weight: 14lb 3oz

This month, Wes FINALLY transitioned out of that horrible, terrible, awful, no good wake-up-every-2/3-hours-to-eat-and-cry phase and started sleeping long stretches! I’m talking 11pm-6am then another stretch from 6:30-8:30am.

And, we seem to have a bit of a routine going. Once he wakes up, he eats, gets time on his play mat, eats again, and naps. That gets us through till about anywhere from 12-4 pm. The afternoons and evenings are still up in the air- once Tyler gets home (and the dogs bark and inevitably wake him up) he will vary between lots of feedings, being carried around, ergo baby naps, the floor…you name it. At night, we top him off with a bottle and he’s out. He’s still only on breastmilk too. You’re welcome for sharing.

Wes loves staring at all the toys on his playmat. I’ve rearranged them a few times and he still has a favorite (the owl.aka: there is a lot of hoots made in our house now). He loves finding the brightest thing in the room and staring at it. Or staring at the wall because that’s equally interesting.

He LOVES being on his changing table. I usually spend a few minutes playing with him before we attend to his ‘business’ and another few minutes afterwards. He gets pretty chatty and kicks a lot. Most of the time when he’s on the table, I’ll FaceTime with my mom and dad so they can see him.

He now hates getting dressed (now I know he’s my kid!). Most of his clothes are 3 months, but some of them are even 6 months- depending on the brand. He’s in size 2 diapers and absolutely FILLS them multiple times a day. And by FILL I mean you can hold him up and the diaper will just about fall off of him it’s so heavy. 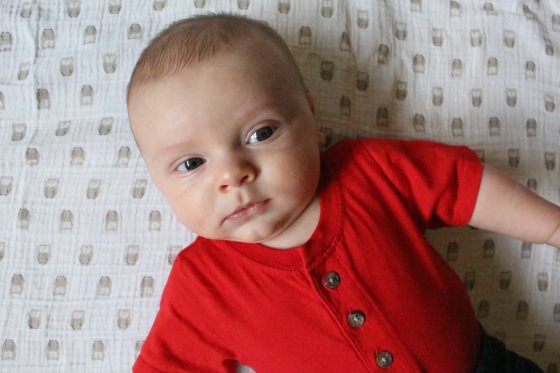 He loves his baths, but doesn’t like getting out of the bath. He loves to punch me in the chest when I’m feeding him *I do not love this*. He loves sitting on our lap and facing the tv. Especially if Game of Thrones is on. He loves when I squeeze his cheeks (the ones on his face). And he loves blowing bubbles. Or drooling on us. A lot.

I think he’s now starting to recognize me- he will be crying in his crib in the morning and when I finally come in, he’ll smile and maybe even giggle. Probably not because he loves me, but because he knows he’s about 2 seconds away from the boob. 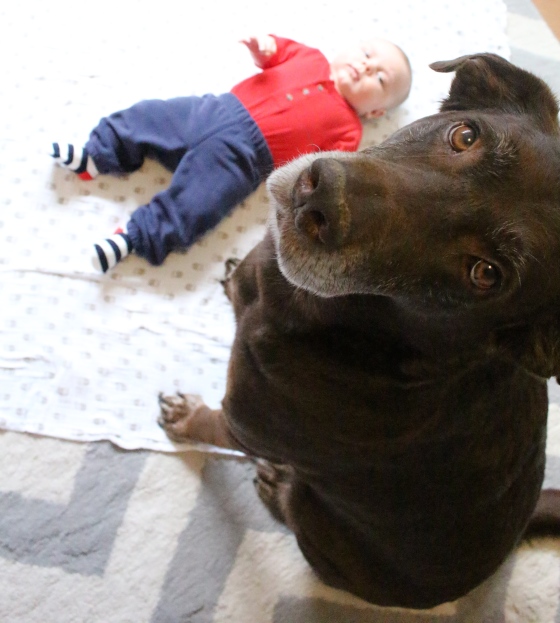 We’ve been doing tummy time and he’s not a super fan, but he’s strong enough that he got the hang of it after about 3 tries. And by strong, I mean STRONG. Those punches to my chest? Not comfortable. And he can kick something fierce. Fingers crossed this transfers to athleticism as he ages and potentially a scholarship? One can hope. College is ‘spensive.

We’ve found that he’s really asleep when we’re holding him ONLY if his mouth is open and/or he takes one of those deep quiver breaths. Then we’re good to put him down and enjoy anywhere between 4 seconds to 4 hours of freedom. HE HAS AN OLD MAN BUTT. It’s probably my favorite thing ever. That and his big cheeks/small chin/no neck combo.

When he had a cold a few weeks ago, he did NOT like it when I put the saline up his nose and sucked out snot. Now, he laughs when I do it. Weirdo baby. If he doesn’t have a large feed, he’ll often fall asleep on my lap on his side and look like he’s posing for Playgirl. I discourage this as a potential career path.

We got his first Canadian passport. (American one will get done as soon as we actually receive the Canadian one and make an appt at the US Consulate office). He naps when I take him on walks but wakes as soon as I get back to our driveway. HOW DOES HE KNOW?!!

He makes a fist with his thumb between his fingers like he’s got your nose. So obviously, he won’t fall for it when I attempt to get his nose when he’s older. Drats. He has big feet. He throws gang signs like a boss. He loves to stick his tongue out and coo. And sometimes we can see his neck when he coos because he works really hard at it.

He’ll turn his head to follow things. He sleeps with his arms out or over his head. I laugh every time I check him out on the monitor. He’s a good multitasker. Ok, maybe not that good, but he CAN eat and poop at the same time. He barfs a lot. Once it even got up my shorts. Talk about gross.

I think that just about covers the majority of his happenings this month. Tomorrow he gets his first round of shots! #bigboy

If you missed his one month update, you can read it here