Well shit. I had this whole post written out, and my computer went and deleted it. I want to scream, but then the puppies would come and rub their wet noses into my sides and that would be gross and uncomfortable. I really don’t think I can re-create the post, either, because that first one was pretty awesome. DANG IT. Let’s try this again.

I figured since my posts as of late have been pretty day-specific, and generally about exercise or food or stuff I found on the internet or booze, I would revert back to my old ways and catch up on some life stuff. (See: that’s not funny. The first draft’s intro paragraph was way better.)

1. I won a photo contest from Quest Nutrition Bars that I didn’t even know I entered. The prize was a whole box of their protein goodness, so I obviously went with chocolate chip cookies dough. Want to see what pic got me free stuff? 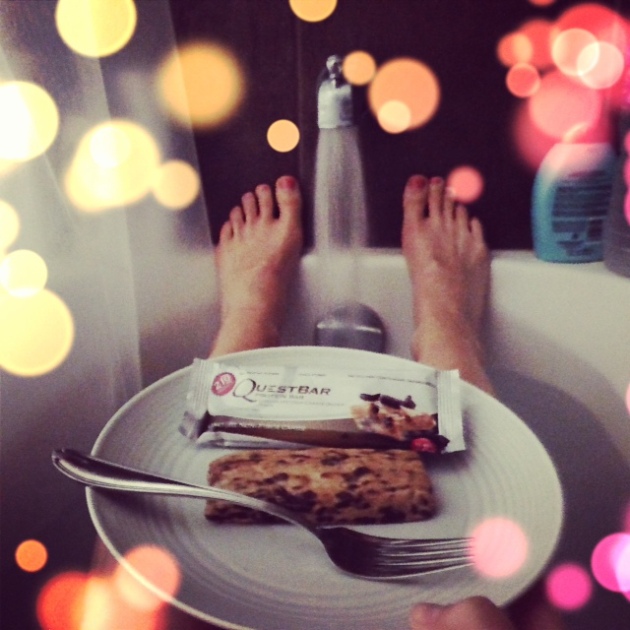 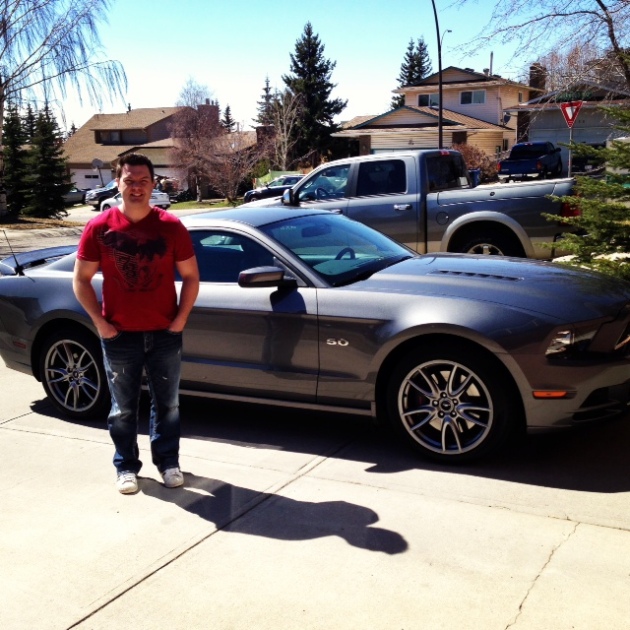 Tyler got a brand new 2013 Mustang (followed by a bunch more fancy words that makes the car sound super awesome. whatever). We’ve only really taken her out once, and it was pretty awesome. I can’t drive her, though. Not because of any Man-Ego-Bursting reasons, but simply because I don’t know how to drive standard. Nor do I really want to because the last thing I want is for anything to happen to my sister wife while I’m out with her. Yaknowwhatimsayin.

3. About a week or so ago, I made a batch of cake batter blondies. Solely for the purpose of eating sprinkles. And I needed something to put them in. Don’t get me wrong, I’m all for ordering an extra cup of sprinkles with my soft serve (EVERYONE should be doing that), but I didn’t want to run the risk of having Tyler come home to me on the floor in a sugar coma with empty sprinkles jars. Although, similar things have happened (namely with brownie batter and Nutella). 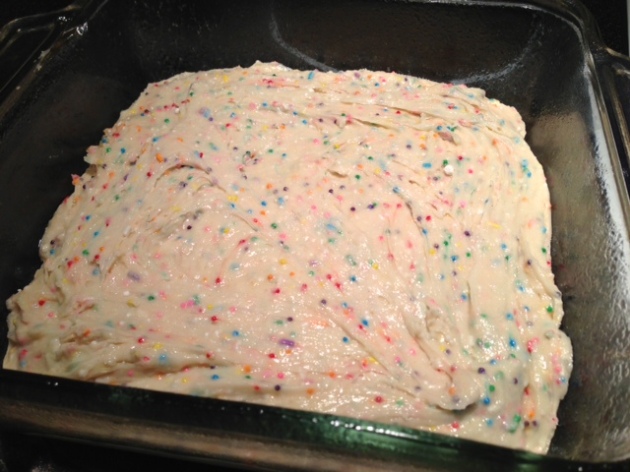 I pretty much followed the recipe you’ll find online. Honestly, if you just google it, there will be about 2305972039 search results, all posting pretty much the same recipe. Only difference with mine was that I added extra almond milk AND I threw in some pb2 powder. Um yeah, that was the best decision ever because those suckers were the bomb dot com. But then I wasn’t craving them the next day so I threw them out. This would be different if I HAD A JOB in which case I would bring excess treats into work to share. BUT NO….Sigh, I’m not going there today. I will probably cry. I go plop my mug into that big ass tub of nutella I recently purchased. No, can’t do that. I have a wedding dress to fit into. Sidenote: It is a TERRIBLE idea to have the final fitting for your dress SIX months before the actual wedding. And it doesn’t help that it is sitting in the bridal shop 3000 miles away so I can’t even visit it and make sure I don’t look like a sausage in it!

4. The three of us (Me, Tyler and the Sister Wife) drove out to Canmore on Saturday. 1.) So Tyler could break in the new gal 2.) To enjoy the friggin FIRST nice day of the year, and 3.) To go test out some beers and enjoy a nice lunch on the patio. We went to The Grizzly Paw for our first stop and enjoyed some beers. (The first draft had a really good joke about getting sun burns, but now I totally forget it, so your loss) 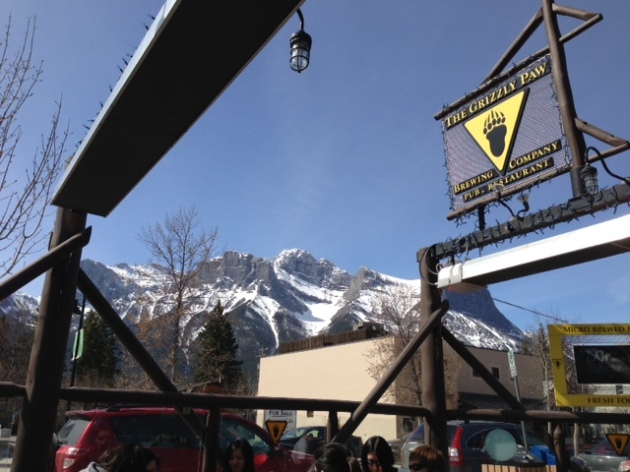 Maybe it was something about how it was so nice to sit outside and enjoy a great afternoon of drinks and food even though we each only got burnt on one side of our bodies? I don’t know, I think there was some mention of altitude in that joke as well.

The beers were really good! The only one I didn’t care for was the IPA. (Canadian joke: IP-eh! hahaha I’m so silly) 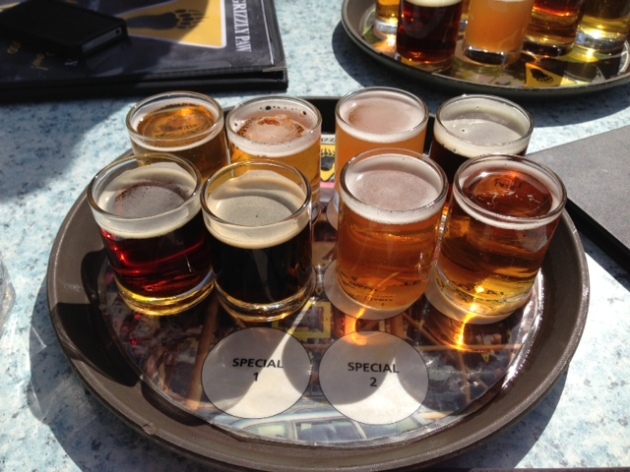 And we both got Bison burgers. My side HOUSE salad had beets and egg and a whole bunch of other delicious things that I immediately shovelled into my mouth. 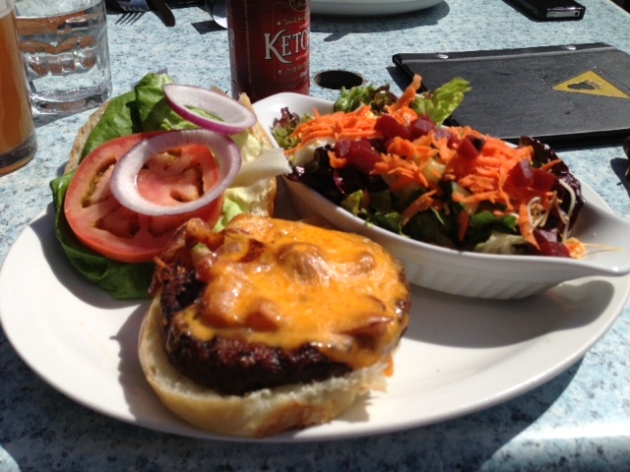 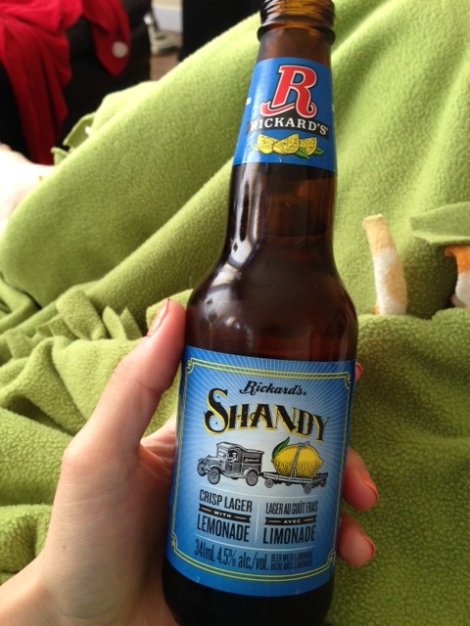 This stuff was WAY TOO EASY to drink. That is all I will say about that.

6. Tyler is SO good on the grill. We had filet mignon with caesar salads and grilled corn the other night. The dogs were going nuts because we kept ‘mmmmm-ing’. 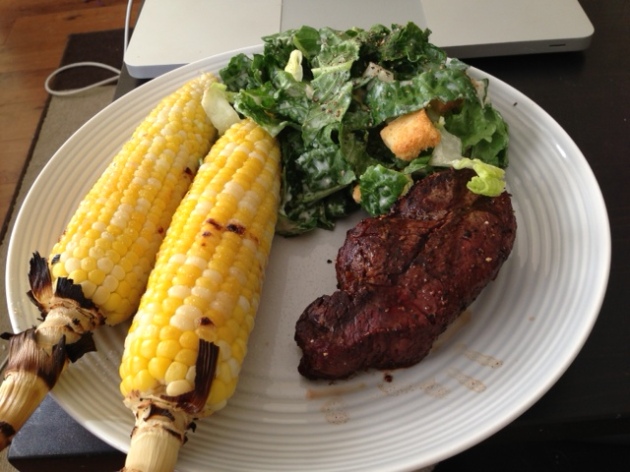 Also, the corn was from the US so of course it was good.

7. Now that the sun has made its appearance for 2013, I have to take what I can get and say VAMOOS to tank top tan lines. Those don’t make for good wedding pictures..or so I hear. 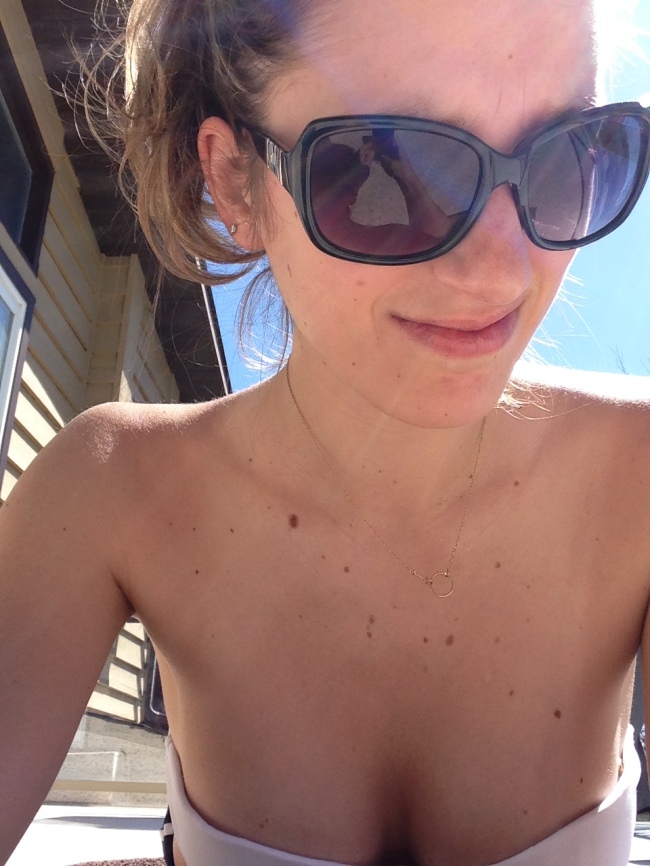 I was not intending for that picture to look scandalous, but I guess that’s what happens when you unhook the straps of a bathing suit. (for no tan lines people!)

Other tidbits as of late:

Now you tell me something!!!