Confused? Most of you probably are, since I’ve been hiding a bit of the truth. Two years ago today, Tyler and I officially got married. On a cliff. In the mountains. Next to a pile of sheep sh*t. It was magical. 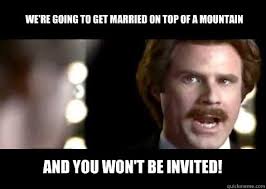 Crap, are you mad?? I’m not. We knew we wanted to be married after our second date, and the whole international barrier thing made the decision to go ahead with it much easier. But then of course we did the ‘real’ wedding about 15 months later–> read about it here.

I LOVE the way we got married. The only expense was the marriage license and there was no pressure because practically no one was there watching! (I’m sure that sheep was watching from afar). In turn, the day of the real wedding was easy breezy because all I had to do was show up in a white dress and say I Do…again.

The only reason it was kept somewhat of a secret was because Tyler wanted to make sure that our actual wedding celebration would feel just as special. Soooo, I didn’t legally change my name until after our second wedding. At least state-side. And I got to call him my fiancé for a while, since we never really had an engagement.

Also, I get two anniversaries now.