Hi friends! How’s your day going so far? Same old, same old over here. I’m covered in dog slob and baby barf, the house is a mess and I’m sure something in the house will break today…if it hasn’t already. Other than that, I’m great! Wouldn’t trade it for the world. Mostly because of my wonderful little guy.

Speaking of little, have you heard of Little Misfits?

They are a great little company that make rad clothes for babies, toddlers, kids….and adults! (But I’ve found that since having a little one of my own, he gets all the cool stuff and mom’s wardrobe gets put on the back burner. Am I right?)

The people at Little Misfits were awesome and allowed me to pick out an item from their website for Mr. Wes to model. I LOVE that with all the options, you also have the ability to add little tattoo sleeves! So cool. I probably would have opted for that if Wes was a bit older just so that he could fill them out a bit more. But as soon as I saw the Guess How Much I Love You onesie, I knew I had to choose that one! It’s something I used to say to Tyler when we were dating “love you to the moon…” (I still love him, I just don’t say it anymore. He’s not offended).

I chose the smallest size (0-6mo) and what do you know, my little chubster fills it out nicely as just 2 months!

I think my favorite thing about this design is that it’s a reflective, shiny gold. Makes my kid stand out among all the others in boring puppies (still love them), tractors, and dinosaur outfits. Actually, I think it’s making me bring the saying back. Yep, I think I’ll start saying it to Tyler again. I mean hey, I love him enough to have a kid with him…right? 🙂

See? Still looks cute on a kid with no neck! Disclaimer: He has a neck. It’s just buried. I look for it every few days to make sure it’s still there. 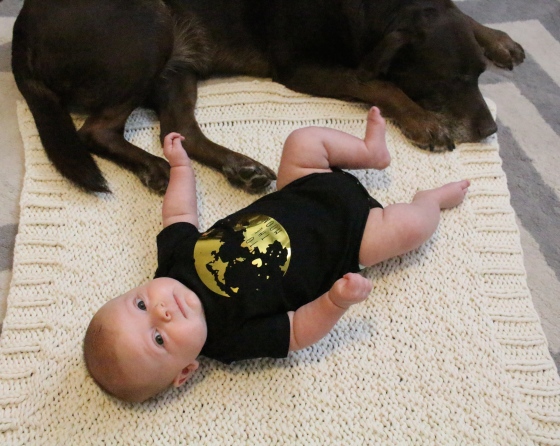 Layla ALWAYS has to be in the photos. I think she was a model in a former life. 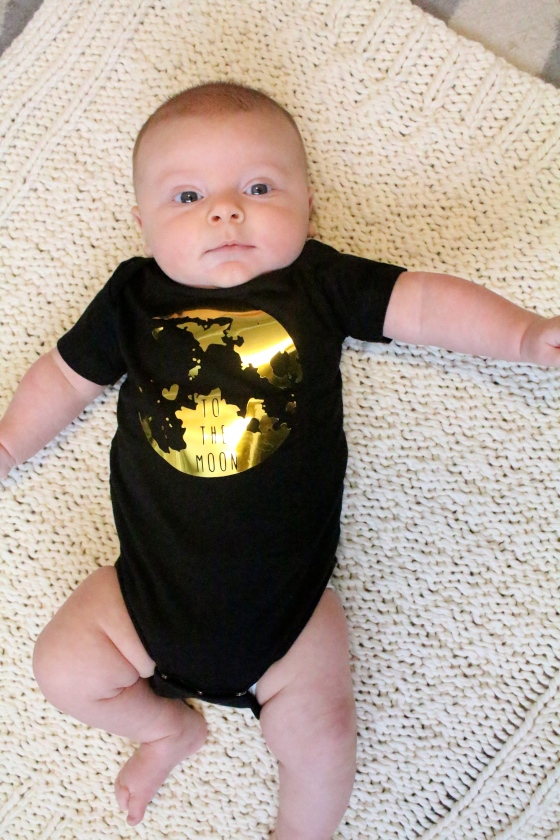 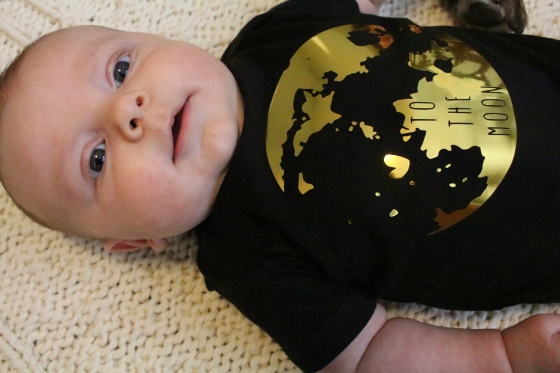 Another cool thing about Little Misfits is that they come out with a Misfits For a Cause collection which features a different charity each month and 100% of the proceeds to go that charity! June’s charity is the Tim Horton’s Children’s Foundation which sends children from low-income families to summer camp.

I REALLY love this onesie and I just hope Wes doesn’t grow too quickly so we can get a few more wears out of it. I already have in mind some places where he needs to be seen in it! Call the paparazzi.

Next order for us will definitely include a shirt or onesie with the tattoo sleeves. Because….RAD.

Thanks Little Misfits for the onesie..Wes loves it! (Does barfing on it count as a token of affection? The good news is, it washes well!)