Yesterday’s walk was apparently super strenuous. After I threw back that smoothie, I got up to rinse the glass, and boom- hip.in.pain. Like couldn’t stand up straight pain. Like I had flashes of Life Alert commercials and those bath tubs with doors for old people commercials. Ack, I was surely close to death. And everyone knows if you’re home in the middle of the day and your hip hurts, you take a bubble bath. So that is what I did. just following protocol. 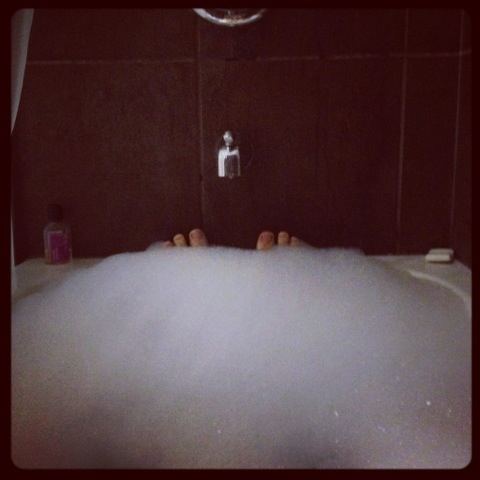 It wasn’t all that peaceful. About halfway through, the doorbell rang and all three dogs flipped their shit and barked nonstop for 5 minutes. Had I been more mobile, I would have gotten out and….. Nope, still wouldn’t have done anything.

Moving on to dinner, I found a really appealing recipe for Buffalo Quinoa Mac and Cheese on Jessica’s blog. I was won over by quinoa and I had the boyfriend on the brain for the buffalo part. I ran over to Safeway for the ingredients and got to work.

Hold up. Let’s go back to the part where I go to the store for the ingredients. I couldn’t remember if we had any chicken in the freezer, so I swung by the meats and picked up an ‘economy’ pack of 5 *that’s right, FIVE* chicken breasts and it was TWENTY-FOUR DOLLARS. What the hell?? I just about went into cardiac arrest. And that’s like the store brand, non-organic stuff. Ugh, I die.

I threw all the schtuff together and WHAM, this happened: 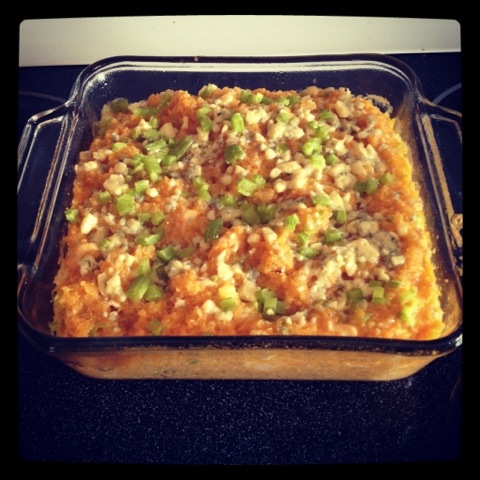 Tyler and I scarfed this deliciousness while watching Survivor. Then…… Either my body went back into lactose-intolerant mode OR I was having sympathy pains for Colton (pff, we all know that’s a crock. Him and Alicia got all bitch-ass-ness on Christina. Karma was not kind to him! Bwahaha.) Back to me: I died. I sucked it up and helped Tyler put a second coat of paint on the walls, but I thought the end was near. I was in bed by 7. And had to skip my workout. And I cried more about that. Because I was feeling so fat and gross and nasty and blughk. Better to be in bed and miserable than to spew said miserableness in front of fellow gym go-oers. You’re welcome, fellow gym go-ers.

I’m still in bed in recovery mode. There appears to have been a minor snow fall last night, so today’s scheduled hike may have to be for a later date. But—–> I will workout today! Come hell or high water or further digestive issues! Go me!

Anyone else have to hole up and miss workouts and hate their life until you finally feel better again and get get a good, hard workout in?

That was a run on sentence, but I don’t care.

2 thoughts on “Rumbly in my Tumbly”