Turn All the Lights On– T-Pain feat. Ne-Yo

Does anyone have any suggestions that I can add to my music collection?? Purdy please?!

Let’s get back to my Humpday, shall we? I was itching to do something today, so what’s free and easy? A walk! It looked nice out, and boy was I right! 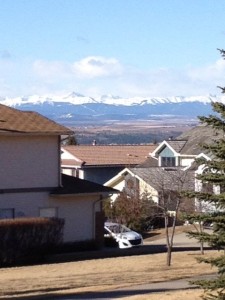 Hey, Napoleon, how much you wanna make a bet I can throw a football over them mountains?!

Speaking of Napoleon Dynamite, I’mma tell you a story. Picture it: Freshman year at college. Making friends. Drinking CHEAP beer. Being silly, Studying (that one’s for you, mom and dad), and what not. So on a random trip to Wal-Mart- the mecca of keeping college students entertained- I decide to buy a hamster and name him Napoleon. BUT, it had to be pronounced ‘Na-po-leoooo(silent n)’ If I knew how to add a sound bit of the correct pronunciation, I would. I bought him a pink wheel and a pink castle and snuck him into my dorm. (The dorm nicknamed The Virgin Vault because of strict security to not allow any boys to come in and visit us awesome froshie gals). Anyhoo, Napoleon lived the life at college. I often let him roam the halls in his little ball and I would often get instant messages from other girls in the dorm saying they saw him roll by. Often, it would be girls on other floors. He was a magical hamster that could handle the stairs.

Weird tangent, but now you know. Sadly, Napoleon’s life was cut short when I left him in his cage at home while I went on vacation to Florida that following summer. When I came back, I realized he ran out of food, so I fed him Craisins. Turns out, Craisins are poison to those little fellas. RIP Napoleon: 2004-2005.

*Cough, cough* So, today’s walk. Beautious. Like, not a cloud in the sky. Layla was happy as a clam. So was I. Minus the wind. And wind burn I discovered upon return. Minor deets. 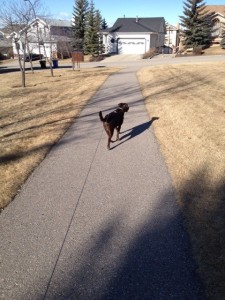 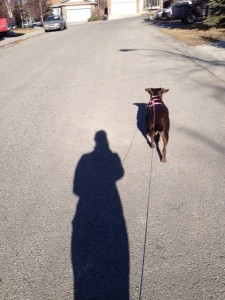 Yeah, I take a lot of pictures of my dog. You would too, if you were (dare I bring it up again) unemployed. At least I’m giving her all the atteny-ten-ten-tion she deserves! I always justify her spoiledness by reminding people of the fact she was a rescue pup and was shot in the face and is missing a bit of her left ear and is deathly afraid of garbage bags. With that, she can have all the walks she wants.

Now here’s where I will display the extent of my artistic photography: 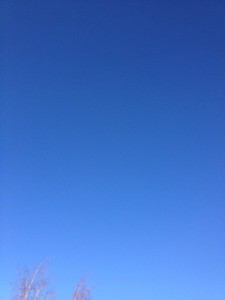 No clouds, bright blue sky, and a glimpse of tree branch on the bottom left. Boom, done. (*Note: I did take the lovely picture you see on the header of this blog!)

Lunch today was going to be the Creamy peanut butter chocolate avocado smoothie I saw on get healthy with heather, but I swapped the avocado for spinach when I found that my avocado should have been tossed about a week ago. whoops. Here’s my modified recipe I took from her blog: 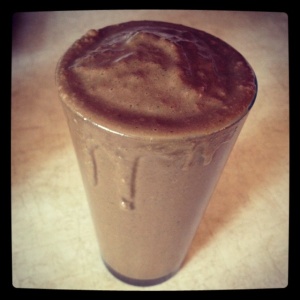 I am slurpin’ this sucker down now! Yum!

Any favorite/interesting smoothies out there? I’m all ears!!

I got a late start to my workout last night, but it was a great at-home sweat session! I completed 1/2 of Bobbi‘s 20 minute Tuesday workout (weird, but it took me 20 minutes to just do half. Anyone else try this? Am I way off? I blame the altitude.) I then did a 20 min ab workout on the stability ball and some glute work on the mat (donkey kicks w/variations, froggers). Not bad considering I was about to forego the workout, but as soon as Tyler said “Ok, I’m gonna go kill a few aliens before bed,” I knew I could use that time proactively and torch some cals. 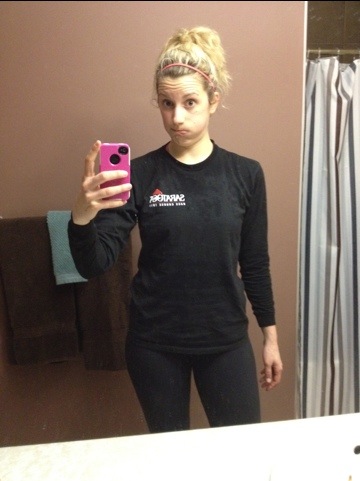 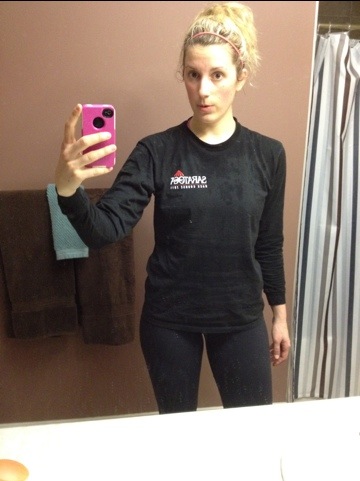 Today’s workout will have to be much more intense after wolfing down this heifer for dins last night: 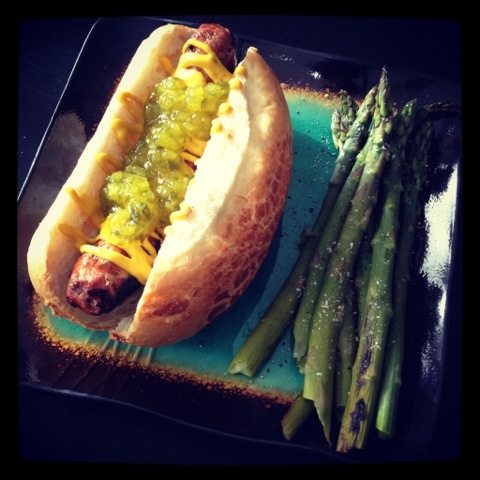 We got started on painting the living room last night after those mondo sausages were scarfed. Word of advice: don’t paint in the dark; you’ll miss a ton of spots. We only got one coat on, but I’ll definitely be posting before and after pics. There really is just so. much. brown.

I used the last of my Click
protein powder yesterday (read: SO SAD! It’s hard to find and I can’t afford to order online and have it shipped to Canada! Anyone wanna help me out?!?! I need my Click! 😉 ) that said, I actually needed to brew a pot o’ coffee this AM to accompany my oats balls for breaky. 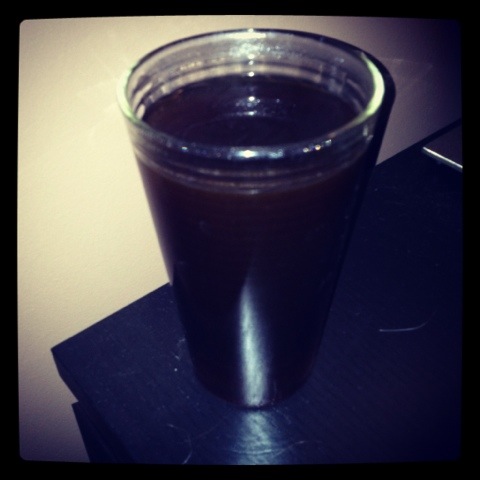 Good, but not as good as the espresso protein powder! In case you were wondering, I poured the coff coff in a juice glass because I didn’t want to keep making trips back to the kitchen. I’m way too busy watching daytime TV, talking into the internet box, and planning my day. Plus, I rather prefer lukewarm coffee. You should see the look on the Starbucks barista’s face when I order a hot coffee- half filled with iced coffee.

Methinks today is garbage day. Only because there is an obscene amount of banging going on down that weird back-alley where everyone keeps their trash bins. I’m about turn into an old bag lady and run out in my pj’s and give Mr. Garbage man a piece of my mind. Actually, who am I kidding, I’ve been up since 4:30 this morning. Prime blog reading and book reading time. Head and iPhone under the covers/pillow. Obviously. The boyfriend don’t mind, but the dog? She turns into a fury ball of bitchy when her sleep is disrupted. Perhaps she should rethink her attitude and realize she has free reign over my half of the bed, and I’m the one who suffers. Way better than the floor, dawg.

And there ya go.